Whatever Happened to... Robot Jones? facts for kids

Whatever Happened to... Robot Jones? (usually shortened to Robot Jones or WHTRJ?) is an American animated television series created by Greg Miller for Cartoon Network.

The show follows a robot named Robot Jones who attends the fictional suburban Polyneux Middle School in a retrofuturistic 1980s world. In each episode, Robot Jones researches an aspect of human life, which include music, facial hair, gym class, etc. He is guided by his three friends, who go by the nicknames Socks, Mitch, and Cubey. Robot Jones is often smitten with his crush, Shannon Westerburg, a tall, young girl with orthodontic headgear and a prosthesis. In school, Robot Jones interacts with his teachers, Mr. McMcMc, Mr. Workout, and Mrs. Raincoat; the principal, Mr. Madman; and janitor Clancy Q. Sleepyjeans. His arch-rivals, Lenny and Denny Yogman, try to sabotage Jones's research by making school more difficult for him.

Miller's pilot for the series first aired on Cartoon Network on June 16, 2000, as part of a contest called "Voice Your Choice Weekend", in which new series pilots were shown on the network for viewers to decide on which would be the best one to eventually become its own full-fledged series. Despite the Robot Jones pilot coming in second to the Grim & Evil short, Robot Jones was greenlit for its own series, which premiered on July 19, 2002. The titular character's voice in the first season was created with a Microsoft Word 98 text-to-speech function. Beginning with the second season, Robot Jones's voice was dubbed over by child actor Bobby Block, and reruns of the first season were re-dubbed with Block's voice as well. The series ended on November 14, 2003, after 13 episodes and 1 pilot. 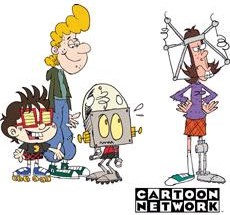 The series centers on Robot Jones (voiced by a text-to-speech program in the pilot and season 1; Bobby Block in season 2), a teenage robot who lives in a small city in Delaware in a version of the early 1980s where robots are commonplace. Robot attempts to learn of human nature by attending Polyneux Middle School where he makes three new friends: Timothy "Socks" Morton (Kyle Sullivan), a tall boy who loves rock music, Mitch Davis (Gary LeRoi Gray), a headphones-wearing boy whose eyes are hidden by his long hair, and Charles "Cubey" Cubinacle (Myles Jeffrey), a shorter boy who loves video games. He also meets Shannon Westerburg (Grey DeLisle), a girl he becomes attracted to because of her large retainer and metal prosthetic leg.

Each episode has Robot explore a concept faced by average teenagers, such as gym class or competitions. Robot immerses himself in each subject to fully understand it while trying to fit in with his human peers, but this is challenging due to his social ineptitude and others' lack of understanding. As Robot settles in at school, he explores humanoid concepts of his own will. Though the situations he finds himself in are usually at his parents' insistence, others are a result of Robot trying to get closer to Shannon. An example is in "Summer Camp" when Socks convinces Robot to go camping and Robot discovers the ability to feel jealous. Due to his polite nature and short stature, students at his school tend to ignore Robot or are oblivious to his existence. His good grades, poor social skills, and status as a robot are at odds with Principal Madman, a technophobic principal, Mr. McMcMc, a jealous and insecure math teacher, and Lenny and Denny Yogman, two genius twin brothers. At the end of an episode, Robot reads a "data log entry" about what he learned that day and what conclusions he has arrived at on humanity.

The opening sequence, in which Robot Jones is factory assembled and inserted into a school bus, is an homage to that of 1980s children's show You Can't Do That on Television. When the title of the show is spoken, a group of young children voice the "Whatever Happened to..." part in unison while the "Robot Jones?" part is done by a Macintosh Macintalk voice known as Trinoids. The first season has children speaking out episode titles while season 2 episode titles are spoken by voices of the characters.

After production ceased on Robot Jones, it aired in syndication before being removed from Cartoon Network's schedule, but episodes were available online on Cartoon Network Video for a short period.

From 2005 to 2008, Robot Jones returned sporadically in reruns on The Cartoon Cartoon Show, along with segments of other Cartoon Cartoons from that time period.

Robot Jones made a cameo appearance on the OK K.O.! Let's Be Heroes episode "Crossover Nexus" that aired October 8, 2018, along with other Cartoon Network characters from current and ended shows. This marks the first appearance of Robot Jones's character since the show's cancellation and the first time since the first season where the character's voice was provided by the Microsoft Word 98 text-to-speech programmed voice.

All content from Kiddle encyclopedia articles (including the article images and facts) can be freely used under Attribution-ShareAlike license, unless stated otherwise. Cite this article:
Whatever Happened to... Robot Jones? Facts for Kids. Kiddle Encyclopedia.