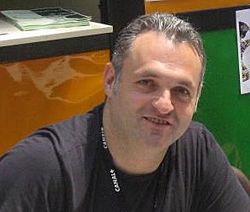 Genndy Tartakovsky was born in Moscow, Russia. He and his family moved to Chicago to escape communism. Genndy became a cartoonist and educated at Calarts.

He would create Dexter's Laboratory at Cartoon Network. He worked alongside Craig McCracken to help him with The Powerpuff Girls. The success of both cartoons helped Genndy create Samurai Jack for the same broadcasting company. George Lucas contacted Genndy to make a Star Wars cartoon while doing Samurai Jack. Genndy shifted work between Adult Swim and Sony Pictures Animation. He directed the first three Hotel Transylvania movies and made a fifth season of Samurai Jack on Adult Swim. He would later create Primal, a prehistoric animated show with no spoken speech.

All content from Kiddle encyclopedia articles (including the article images and facts) can be freely used under Attribution-ShareAlike license, unless stated otherwise. Cite this article:
Genndy Tartakovsky Facts for Kids. Kiddle Encyclopedia.