The Powerpuff Girls facts for kids

The Powerpuff Girls is an American comedy-action satirical adventure superhero children's animated television series. It aired on Cartoon Network in 1998-present. It is about three superpower magic-girls superhero named Blossom, Bubbles, and Buttercup in Townsville, USA. They are in kindergarten to elementary schools and have superpowers, through save the worlds from villainous. The show was created by Craig McCracken and revival developed by Nick Jennings and Bob Boyle created and produced by Hanna-Barbera and Cartoon Network Studios. also the theatrical film adaption in 2002 as The Powerpuff Girls Movie by Warner Bros Animation. 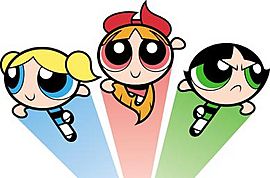 As depicted in the opening sequence of each episode, the Powerpuff Girls Blossom, Bubbles and Buttercup were created by Professor Utonium in an attempt to create the "perfect little girl" using a mixture of "sugar, spice, and everything nice". However, he accidentally spilled a mysterious substance called "Chemical X" into the mixture, creating three girls and granting all three superpowers including wingless flight, super strength, superhuman speed, near invulnerability, x-ray vision, superhuman senses, red heat vision, pink-green-and-blue energy projection, invisibility, and control over lightning and fire. In the original pilot, the accidental substance was a can of "Whoopass", which was replaced by "Chemical X" in the aired version.

The three girls all have oval-shaped heads, abnormally large eyes inspired by Margaret Keane's art, flat feet with toes and stubby arms and legs, and lack noses, ears, fingers and necks. McCracken preferred them to look more animated rather than going for a "realistic" look, meaning fewer body parts were needed. Blossom, Bubbles, and Buttercup normally wear dresses that match the colors of their eyes with black stripes, as well as white tights and black Mary Janes. The closing theme to the cartoon offers a nutshell description of the three Powerpuff Girls' personalities: Blossom, commander and the leader. Bubbles, she is the joy and the laughter. Buttercup, she is the toughest fighter.

All content from Kiddle encyclopedia articles (including the article images and facts) can be freely used under Attribution-ShareAlike license, unless stated otherwise. Cite this article:
The Powerpuff Girls Facts for Kids. Kiddle Encyclopedia.