Lauren J. Faust (born July 25, 1974) is an American animator and writer, best known as the creator of the animated series My Little Pony: Friendship is Magic for Hasbro, as well as for working frequently with her husband Craig McCracken. Faust has also worked as an animator on television series such as The Powerpuff Girls and Foster's Home for Imaginary Friends, and with companies like Cartoon Network Studios, Warner Bros., Hasbro, Disney, and DreamWorks Animation. She is currently the developer of the televised reboot of DC Super Hero Girls, which premiered in 2019.

When she ten and home sick from school she wrote a letter to Hasbro because she wanted to trade ideas with them. She would give them ideas for new My Little Pony figures and they would give her the ones she hadn't collected yet.

Faust attended the California Institute of Arts from 1992 to 1994, working as a layout artist at Rough Draft Studios. She then worked as an animator at Turner Feature Animation for two years and then as an animator for Warner Bros. Feature Animation for two years. Faust started working at Cartoon Network Studios in 1999. She worked as a storyboard artist and screenwriter at Cartoon Network Studios for four years and then as a supervising producer and story supervisor.

Faust's early career focused on animated feature films, working on Cats Don't Dance, Quest for Camelot, and The Iron Giant as an animator. She shifted to television animation in the 2000s, working on The Powerpuff Girls, Foster's Home for Imaginary Friends, My Little Pony: Friendship Is Magic, Super Best Friends Forever, and Wander Over Yonder. She is also the creator and developer of the toy line Milky Way and the Galaxy Girls.

Sony Pictures Animation announced in June 2014 that Faust would direct an animated comedy feature film titled Medusa, created by Todd Alcott and Holly Golden. The film tells a new story about the character from Greek mythology, in which a young lady named Medusa sets out on a quest to revert the curse she earned from a jealous goddess. In November 2015, Faust announced that she was no longer involved with the project or with Sony.

Faust worked with Hasbro to develop the company's My Little Pony property, resulting in the series My Little Pony: Friendship Is Magic. The series proved to be a major success not only with the primary young audience, but also significantly among adults and teenagers, who became popularly known as "bronies".

In 2019, Faust collaborated with Warner Bros. to create and develop a reboot of DC Super Hero Girls, which was her first television program since collaborating with her husband in Wander Over Yonder. 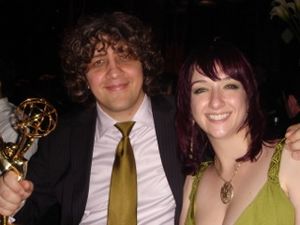 Craig McCracken and Lauren Faust in 2003

Faust is married to Craig McCracken, creator of The Powerpuff Girls, Foster's Home for Imaginary Friends, and Wander Over Yonder. They met while they were working on the third season of The Powerpuff Girls. Faust has worked with her husband on all of his shows. She considers herself a lifelong feminist. Faust took maternity leave in mid-2016 to take care of her newborn daughter.

All content from Kiddle encyclopedia articles (including the article images and facts) can be freely used under Attribution-ShareAlike license, unless stated otherwise. Cite this article:
Lauren Faust Facts for Kids. Kiddle Encyclopedia.