The Iron Giant facts for kids

The Iron Giant is a 1999 American animated science fiction action film produced by Warner Bros. Feature Animation and directed by Brad Bird in his directorial debut. It is based on the 1968 novel The Iron Man by Ted Hughes (which was published in the United States as The Iron Giant) and was scripted by Tim McCanlies from a story treatment by Bird. The film stars the voices of Vin Diesel (voicing the titular character), Eli Marienthal, Jennifer Aniston, Harry Connick Jr., Christopher McDonald and John Mahoney. Set during the Cold War in 1957, the film centers on a young boy named Hogarth Hughes, who discovers and befriends a gigantic metallic robot who fell from outer space. With the help of a beatnik artist named Dean McCoppin, Hogarth attempts to prevent the U.S. military and Kent Mansley, a paranoid federal agent, from finding and destroying the Giant.

The film's development began in 1994 as a musical with the involvement of The Who's Pete Townshend, though the project took root once Bird signed on as director and hired McCanlies to write the screenplay in 1996. The film was animated using traditional animation, with computer-generated imagery used to animate the titular character and other effects. The understaffed crew of the film completed it with half of the time and budget of other animated features. Michael Kamen composed the film's score, which was performed by the Czech Philharmonic.

The Iron Giant premiered at Mann's Chinese Theater in Los Angeles on July 31, 1999, and was released worldwide on August 6. The film significantly under-performed at the box office, grossing $31.3 million worldwide against a production budget of $50 million, which was blamed on Warner Bros.' unusually poor marketing campaign and skepticism towards animated film production following the mixed critical reception and box office failure of Quest for Camelot in the preceding year. Despite this, the film was praised for its story, animation, characters, the portrayal of the title character and the voice performances of Aniston, Connick Jr., Diesel, Mahoney, Marienthal and McDonald. The film was nominated for several awards, winning nine Annie Awards out of 15 nominations. Through home video releases and television syndication, the film gathered a cult following and is widely regarded as a modern animated classic. In 2015, an extended, remastered version of the film was rereleased theatrically, and on home video the following year.

During the Cold War, shortly after the Soviet Union launched Sputnik 1 in October 1957, an object from space crashes in the ocean just off the coast of Maine and then enters the forest near the town of Rockwell. The following night, nine-year-old Hogarth Hughes investigates and finds the object, a 50-foot tall alien robot attempting to eat the transmission lines of an electrical substation. Hogarth eventually befriends the Giant, finding him docile and curious. When he eats railroad tracks in the path of an oncoming train, the train collides with him and derails; Hogarth leads the Giant away from the area, discovering that he can self-repair. While there, Hogarth shows the Giant comic books chronicling the adventures of Superman.

The incidents lead a xenophobic U.S. government agent named Kent Mansley to Rockwell. He suspects Hogarth's involvement after talking with him and his widowed mother Annie (Hogarth's father was a U.S. Air Force pilot who died during the Korean War), and rents a room in their house to keep an eye on him. Hogarth evades Mansley and leads the Giant to a junkyard owned by beatnik artist Dean McCoppin, who reluctantly agrees to keep him. Hogarth enjoys his time with the Giant, but is compelled to explain "death" to the Giant after he witnesses hunters killing a deer.

That night, Hogarth is interrogated by Mansley when he discovers evidence of the Giant after finding a photo of him next to Hogarth and brings a U.S. Army contingent led by General Shannon Rogard to the scrapyard to prove the Giant's existence, but Dean (having been warned by Hogarth earlier) tricks them by pretending that the Giant is one of his art pieces. Upset by the apparent false alarm, Rogard prepares to leave with his forces after berating Mansley for his actions. Hogarth then continues to have fun with the Giant by playing with a toy gun, but inadvertently activates the Giant's defensive system; Dean yells at him for nearly killing Hogarth, and the saddened Giant runs away with Hogarth giving chase. Dean quickly realizes that the Giant was only acting in self-defense and catches up to Hogarth as they follow the Giant.

The Giant saves two boys falling from a roof when he arrives, winning over the townspeople. Mansley spots the Giant in the town while leaving Rockwell, and stops the Army, sending them to attack the Giant after he has picked up Hogarth, forcing the two to flee together. They initially evade the military by using the Giant's flight system, but the Giant is then shot down and crashes to the ground. Hogarth is knocked unconscious, but the Giant, thinking that Hogarth is dead, completely gives in to his defensive system in a fit of rage and grief and attacks the military in retaliation, transforming into a war machine and making its way back to Rockwell. Mansley convinces Rogard to prepare a nuclear missile launch from the USS Nautilus, as conventional weapons prove to be ineffective. Hogarth awakens and returns in time to calm the Giant while Dean clarifies the situation to Rogard. The General is ready to stand down when Mansley impulsively orders the missile launch, causing the missile to head towards Rockwell, where it will destroy the town and its population upon impact. Mansley attempts to escape, but the Giant stops him, and Rogard has him arrested. In order to save the town, the Giant bids farewell to Hogarth and flies off to intercept the missile. As he soars directly into the path of the missile, the Giant remembers Hogarth's words "You are who you choose to be", smiles contentedly and says "Superman" as he collides with the weapon. The missile explodes in the atmosphere, saving Rockwell, its population, and the military forces nearby, but seemingly at the cost of the Giant himself, leaving Hogarth devastated.

Months later, a memorial of the Giant stands in Rockwell. Dean and Annie begin a relationship. Hogarth is given a package from Rogard, containing a screw from the Giant which is the only remnant found. That night, Hogarth finds the screw trying to move on its own and, remembering the Giant's ability to self-repair, happily allows the screw to leave. The screw joins many other parts as they converge on the Giant's head on the Langjökull glacier in Iceland, and the Giant smiles as he begins reassembling himself. 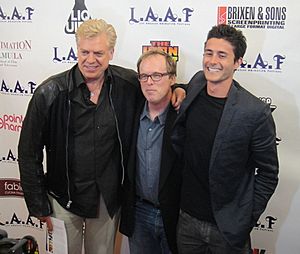 Christopher McDonald, Brad Bird and Eli Marienthal in March 2012 at the Iron Giant screening at the LA Animation Festival

In addition, Ollie Johnston and Frank Thomas voice the train's engineer and fireman, briefly seen near the start of the film. Johnston and Thomas, who were animators and members of Disney's Nine Old Men, were cited by Bird as inspirations for his career, which he honored by incorporating their voices and likenesses (and perhaps even their first names, due to fact that the engineer, who resembles Johnson, said to the other one, who resembles Thomas, his first name Frank) into the film.

All content from Kiddle encyclopedia articles (including the article images and facts) can be freely used under Attribution-ShareAlike license, unless stated otherwise. Cite this article:
The Iron Giant Facts for Kids. Kiddle Encyclopedia.