Diesel has also starred in the comedy The Pacifier (2005) and the crime drama Find Me Guilty (2006). His voice-acting work includes The Iron Giant (1999) and the video game spin-offs from the Chronicles of Riddick franchise, as well as Groot in the Marvel Studios films Guardians of the Galaxy (2014), Guardians of the Galaxy Vol. 2 (2017), and Avengers: Infinity War (2018). He wrote, directed, produced and starred in a short film titled Multi-Facial and the feature-length drama film Strays. He is the founder of the production companies One Race Films, Racetrack Records and Tigon Studios.

Diesel was born in New York City, New York. He studied at Hunter College. He is partners with Paloma Jimenez. His father is African-American and His mother is of English, German, Irish and Scottish descent. 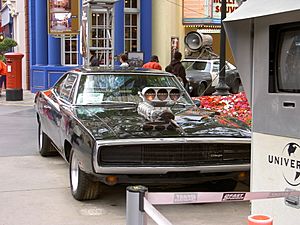 Diesel is noted for his recognizably deep voice; he has said that his voice broke around age 15, giving him a mature-sounding voice on the telephone.

Around 2001, he dated his Fast and the Furious co-star, Michelle Rodriguez.

Diesel and his current partner, Mexican model Paloma Jimenez, have three children: daughter Hania Riley (born April 2008), son Vincent Sinclair (born 2010), and daughter Pauline, whose arrival he announced in March 2015. She is named in honor of his friend and Fast & Furious franchise co-star, Paul Walker, who died in November 2013. He is also the godfather of Walker's daughter, Meadow Rain Walker. His daughter Hania studies Brazilian jiu-jitsu and judo.

All content from Kiddle encyclopedia articles (including the article images and facts) can be freely used under Attribution-ShareAlike license, unless stated otherwise. Cite this article:
Vin Diesel Facts for Kids. Kiddle Encyclopedia.