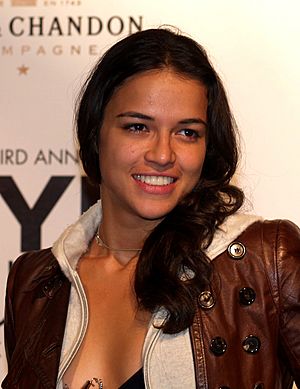 Michelle Rodriguez (born July 12 1978 near San Antonio, Texas) is an American movie and television actress who has starred in numerous television programs and movies. She began with Girlfight in 2000 and continued with other notable movies, such as Avatar and Machete.

All content from Kiddle encyclopedia articles (including the article images and facts) can be freely used under Attribution-ShareAlike license, unless stated otherwise. Cite this article:
Michelle Rodriguez Facts for Kids. Kiddle Encyclopedia.