America Georgin Ferrera ( born April 18, 1984) is an American actress, voice actress, producer, and director. Born in Los Angeles, California, to Honduran parents, Ferrera developed an interest in acting at a young age, performing in several stage productions at her school. She made her feature film debut in 2002 with the comedy-drama Real Women Have Curves, winning praise for her performance. Ferrera is the recipient of numerous accolades including an Emmy Award, a Golden Globe Award, and a Screen Actors Guild Award among others.

Ferrera garnered modest success early in her career with roles in films like the Disney original Gotta Kick It Up! (2002) and the drama The Sisterhood of the Traveling Pants (2005); the latter earned her the Imagen Award Best Actress and her first nomination at the ALMA Awards. She ventured into television roles and landed the leading part on the ABC comedy-drama Ugly Betty (2006–2010). Ferrera garnered critical acclaim for playing the protagonist of the series, Betty Suarez, and won the Best Actress Awards at various award ceremonies in 2007 including the Golden Globe Awards, the Screen Actors Guild Awards, and the Primetime Emmy Award, the first for a Latin woman in the category.

Ferrera's other notable film roles include the drama The Dry Land (2010), the romantic comedy Our Family Wedding (2010), and the crime drama End of Watch (2012). She provided the voice of Astrid Hofferson in the How to Train Your Dragon franchise, including the three films and the television series Dreamworks Dragons. She recently co-produced and starred as Amy Sosa in the NBC comedy series Superstore (2015–2020).

Time magazine named her one of the 100 most influential people in the world in 2007.

Ferrera, the youngest of six children, was born in Los Angeles, California. Her parents, América Griselda Ayes and Carlos Gregorio Ferrera, were originally from Tegucigalpa, Honduras, and immigrated to the United States in the mid-1970s. Her mother worked as the director of the housekeeping staff for one of the Hilton Hotels, and stressed the importance of higher education. When she was 7, her parents divorced and her father returned to Honduras. Ferrera was estranged from her father when he died there in 2010.

Ferrera was raised in the Woodland Hills section of Los Angeles, where she attended Calabash Street Elementary School, George Ellery Hale Middle School and El Camino Real High School. From the age of seven, when she landed a small role in a school production of Hamlet, and then when she was 10, the role as the Artful Dodger in Oliver!, Ferrera knew that she wanted to be a performer. Her first play was Romeo and Juliet, and although only in the third grade, she went to the junior high school and auditioned and got the role of the Apothecary. She acted in school plays and community theatre in Los Angeles throughout her youth, though with little help from her mother, who insisted that she pursue other interests because she was concerned her daughter would not be treated fairly. Ferrera disliked her first name as a child and went by her middle name, "Georgine", until she began acting professionally.

While at El Camino High School, she took acting lessons at the age of 15 and was able to pay for them by waiting tables and babysitting. She entered the University of Southern California (USC) on a presidential scholarship, double majoring in theatre and international relations. She dropped out to focus on her acting career, but completed her bachelor's degree in May 2013.

In July 2002, Ferrera appeared in her first television movie, Gotta Kick It Up! for The Disney Channel. While at a theatre program at Northwestern University that same year, she made her feature movie debut in Real Women Have Curves. Ferrera followed this with roles in television (Touched by an Angel). She also appeared in the movie Plainsong, based on the novel by Kent Haruf, which also featured Aidan Quinn and Rachel Griffiths. Ferrera played a pregnant teenager, Victoria Roubideaux, who has been kicked out of her mother's house; she is taken in by two kindly brothers who live alone on a farm. In the 2005 film How the Garcia Girls Spent Their Summer, she starred as Bianca, a 17-year-old third-generation Mexican-American who is disgusted with the boys in her neighborhood but finds romance with a boy from a neighboring town. In 2006, she appeared in the short film 3:52, which won the Audience Award at the San Diego Women Film Festival. Later that year, she featured in the movie Steel City, which received nominations at the Film Independent Spirit Awards and the Sundance Film Festival. In December 2005, she appeared in the Off-Broadway play Dog Sees God: Confessions of a Teenage Blockhead, directed by Trip Cullman. 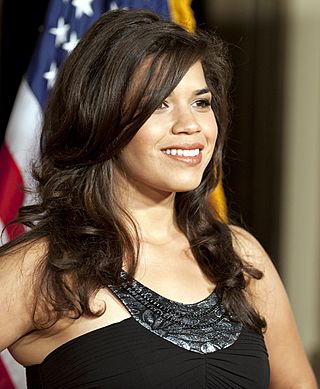 Ferrera at the 2010 Voice Awards

In 2006, Ferrera landed the lead role of Betty Suarez in ABC's new comedy-drama Ugly Betty, an adaptation of the successful Colombian telenovela Yo soy Betty, la fea, in which Ferrera portrays a girl whom her peers find extremely unattractive, thus the series title. As Betty Suarez, Ferrera wears braces, has bushy eyebrows and a disheveled wig, and cosmetics and clothing intended to downplay her own looks, in contrast to most of the "glammed up" characters; Ferrera herself invented the term “Bettification” to describe the process of creating her onscreen persona. In 2007, Ferrera won numerous accolades winning the “triple crown” for her performance in the series; she won the Golden Globe Award for Best Actress – Television Series Musical or Comedy, the Screen Actors Guild Award for Outstanding Performance by a Female Actor in a Comedy Series, and the Primetime Emmy Award for Outstanding Lead Actress in a Comedy Series, becoming the first Latin woman to win the Outstanding Lead Actress Award.

In the wake of her Golden Globe win, Ferrera was congratulated by Hilda L. Solis in the United States House of Representatives and was commended for "helping to break down stereotypes and provide a role model for young Latinas". Time included Ferrera in their 2007 list of the 100 most influential people in the world. Also in 2007, Ferrera won Imagen Foundation's Creative Achievement Award. Ferrera starred as Carmen in the 2005 film The Sisterhood of the Traveling Pants, and reprised the role in 2008's The Sisterhood of the Traveling Pants 2. Among other film work, she supplied the voice of Astrid in the hit animated film How to Train Your Dragon (2010). She also appeared in The Dry Land which premiered at the 2010 Sundance Film Festival and ran at the Dallas International Film Festival where it won the top prize in the Filmmaker Award for Best Narrative Feature.

After Ugly Betty, and Superstore (2011–present)

Ferrera made her London stage debut on November 7, 2011, playing Roxie Hart in the musical Chicago in London's West End. In 2012, Ferrera was featured in the four-hour documentary Half the Sky: Turning Oppression into Opportunity for Women Worldwide, which premiered on PBS October 1 and 2, 2012. The series introduces women and girls living in very difficult circumstances and struggling to challenge them. The Half the Sky PBS TV series is produced by Show of Force along with Fugitive Films. Ferrera starred alongside David Cross and Julia Stiles in the dark comedy It's a Disaster, which premiered at the 2012 Los Angeles Film Festival and had a limited commercial release on April 12, 2013.

On May 17, 2013, ABC announced that Ferrera was cast in a limited-run telenovela titled Pedro & Maria, a modern-day take on Romeo and Juliet set in Washington, D.C. The series had been in development at MTV since 2010 with Ferrera serving as a director on the project, which would have interactive participation online content from viewers. ABC later decided not to move forward with the series. On March 16, 2015, Ferrera was added to the cast of the upcoming NBC sitcom Superstore, portraying Amy, a 10-year veteran floor supervisor at a superstore named Cloud 9. In addition to her main role, Ferrera has co-production duties as well. After NBC had initially announced a sixth season of the series, the network revealed on February 28, 2020, that Ferrera would be departing the series at the end of the fifth season citing new projects and spending time with family. Due to the COVID-19 pandemic shutting down Superstore with one episode left to film, her departure was delayed into season 6 in order to give her character's arc a proper closure. On March 10, 2021, NBC announced that Ferrera would return for the show's one-hour series finale.

In February 2019, it was announced that Ferrera would be credited as an executive producer and director for the Netflix comedy-drama series Gentefied. The series premiered on February 21, 2020. 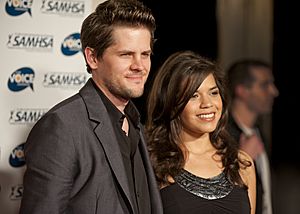 Ferrera with her then-fiancé Ryan Piers Williams in October 2010

Ferrera first met actor, director, and writer Ryan Piers Williams when he cast her in a student film at USC. The couple became engaged in June 2010, and married on June 27, 2011. On January 1, 2018, Ferrera and Williams revealed that they were expecting their first child. She announced on her Instagram page on May 29, 2018, that she had given birth that month to a boy, Sebastian. On May 4, 2020, Ferrera gave birth to a girl, Lucia. On July 1, 2020, Ferrera announced that she and Williams had been together for a total of 15 years.

In 2018, her edited anthology of stories, American Like Me: Reflections on Life Between Cultures, was published by Gallery Publishing Group.

Ferrera has been politically active. During the 2008 presidential primaries, she, alongside Chelsea Clinton and Amber Tamblyn, led the Hillblazers organization in support of Hillary Clinton's campaign.

Ferrera with Hillary Clinton in 2008

Ferrera has been active, through her involvement with the organization Voto Latino and by appearing on various news programs, in getting Latinos in the United States to vote. Ferrera also works with Eva Longoria to co-host She Se Puede, a digital lifestyle platform which encourages voting within the Latina community. As a continuation of their work prior to the 2020 presidential campaign, Ferrera and Longeria recently held a textbanking event with VoteRiders to educate voters about Georgia's strict Voter ID laws ahead of the Georgia Senate runoff.

Ferrera was the opening speaker for the Women's March on Washington on January 21, 2017.

Ferrera spoke at the Families Belong Together protest on June 30, 2018.

All content from Kiddle encyclopedia articles (including the article images and facts) can be freely used under Attribution-ShareAlike license, unless stated otherwise. Cite this article:
America Ferrera Facts for Kids. Kiddle Encyclopedia.