How to Train Your Dragon 2 facts for kids

How to Train Your Dragon 2 is a 2014 American computer-animated action fantasy film loosely based on the book series of the same name by Cressida Cowell, produced by DreamWorks Animation and distributed by 20th Century Fox. It is the sequel to the 2010 computer-animated film How to Train Your Dragon and the second installment in the trilogy. The film was written and directed by Dean DeBlois, and stars the voices of Jay Baruchel, Gerard Butler, Craig Ferguson, America Ferrera, Jonah Hill, Christopher Mintz-Plasse, T.J. Miller, and Kristen Wiig, along with Cate Blanchett, Djimon Hounsou, and Kit Harington joining the cast. The film takes place five years after the first film, featuring Hiccup and his friends as young adults as they meet Valka, Hiccup's long-lost mother, and Drago Bludvist, a madman who wants to conquer the world.

DeBlois, who co-directed the first film, agreed to return to direct the second film on the condition that he would be allowed to turn it into a trilogy. He cited The Empire Strikes Back and My Neighbor Totoro as his main inspirations, with the expanded scope of The Empire Strikes Back being particularly influential. The entire voice cast from the first film returned, and Cate Blanchett and Djimon Hounsou signed on to voice Valka and Drago, respectively. DeBlois and his creative team visited Norway and Svalbard to give them ideas for the setting. Composer John Powell returned to score the film. How to Train Your Dragon 2 benefited from advances in animation technology and was DreamWorks' first film to use scalable multicore processing and the studio's new animation and lighting software.

How to Train Your Dragon 2 premiered at the 2014 Cannes Film Festival on May 16, 2014, and was released in the United States on June 13. The film received largely positive reviews for its animation, voice acting, musical score, action sequences, emotional depth, and darker, more serious tone compared to its predecessor. It grossed over $621 million worldwide, making it the 12th-highest-grossing film of 2014. It earned less than its predecessor at the US box office, but performed better internationally. It won the Golden Globe Award for Best Animated Feature Film and was nominated for the Academy Award for Best Animated Feature, losing to Big Hero 6. The film won six Annie Awards, including Best Animated Feature. The final installment in the trilogy, How to Train Your Dragon: The Hidden World, was released on February 22, 2019.

Five years after the Viking villagers of Berk and the dragons made peace, they live together in harmony. Hiccup and his dragon, Toothless the Night Fury (presumably the last of his kind) discover and map unexplored lands. Now 20 years old, he is being pressed by his father, Stoick the Vast, to succeed him as chieftain, although Hiccup feels unsure he is ready.

While investigating a burnt forest, Hiccup and Astrid discover the remains of a fort encased in ice and meet a dangerous group of dragon-trappers. One of the trappers, Eret, blames the two for his fort's destruction and attempts to capture their dragons for the trappers' leader, Drago Bludvist, who plots to capture and brainwash all of the dragons and make them his soldiers. Hiccup and Astrid escape and warn Stoick about the dragon army Drago is amassing. Stoick orders the villagers to fortify the island and prepare for battle. Hiccup, however, refuses to believe war is inevitable, and flies off to talk to Drago. Stoick stops him, explaining that he once met Drago at a gathering of chiefs, where Drago had offered to protect them from dragons if they pledged to serve him; when they refused, he had his dragons attack them, with Stoick the sole survivor. Undeterred, Hiccup flies off with Toothless in search of Drago to try to reason with him.

They meet a dragon-rider named Valka, who is revealed to be Hiccup's long-lost mother. She explains that she, like her son, could not bring herself to kill dragons. After being carried off during a dragon raid, she spent 20 years rescuing dragons from Drago's traps and bringing them to an island nest created out of ice by a gigantic alpha dragon called a "Bewilderbeast", which is able to control smaller dragons. Stoick and his lieutenant Gobber track Hiccup to the nest, where Stoick discovers his wife is alive. Meanwhile, Astrid and the other riders force Eret to lead them to Drago, who captures them and, learning of Berk's dragons, sends his armada to attack the dragon nest. He also attempts to have Eret executed, but Astrid's dragon, Stormfly, flies in and saves him, getting herself captured in the process. A grateful Eret later helps her and the rest of the riders escape.

At the nest, a battle ensues between the dragon-riders, Valka's dragons, and Drago and his armada, during which Drago reveals he has his own Bewilderbeast to challenge the alpha. The two colossal dragons fight, ending with Drago's Bewilderbeast killing its opponent and becoming the new alpha. Drago's Bewilderbeast seizes control of all the adult dragons, which hypnotically obey. Hiccup tries to persuade Drago to end the violence, but Drago orders him killed. Toothless, under the Bewilderbeast's influence, approaches Hiccup and launches a plasma bolt toward him, but Stoick pushes Hiccup out of the away and is killed instead. The Bewilderbeast momentarily relinquishes control of Toothless, but Hiccup drives Toothless away in a fit of despair. Drago maroons Hiccup and the others on the island and rides Toothless, again under the control of the Bewilderbeast, to lead his army to conquer Berk. Stoick is given a Viking funeral and Hiccup, now having lost both his father and dragon, is unsure what to do. Valka encouragingly tells him he alone can unite humans and dragons. Inspired by her words and his father's, Hiccup returns to Berk to stop Drago.

The Vikings and dragons celebrate their victory and Hiccup is made chieftain of Berk. Afterwards, Berk undergoes repairs, with Hiccup feeling secure that its dragons can defend it. 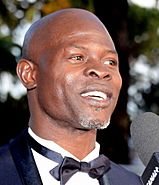 Cate Blanchett and Djimon Hounsou, who joined the cast as Valka and Drago Bludvist, respectively, attending the film's premiere at the 2014 Cannes Film Festival

All content from Kiddle encyclopedia articles (including the article images and facts) can be freely used under Attribution-ShareAlike license, unless stated otherwise. Cite this article:
How to Train Your Dragon 2 Facts for Kids. Kiddle Encyclopedia.