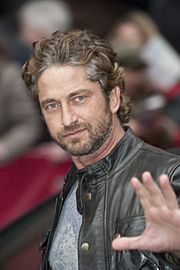 Gerard James Butler (born 13 November 1969) is a Scottish movie, television, stage, and voice actor who is known for his roles in 300, Law Abiding Citizens, PS, I Love You, Dracula 300, Coriolanus, Machine Gun Preacher, How to Train Your Dragon, Olympus Has Fallen and London Has Fallen.

Butler was born on 13 November 1969 in Paisley, Scotland. Butler was raised in Glasgow, Scotland. He studied at St. Mirin's High School and at Glasgow University. He dated actress Jennifer Aniston for a few months in 2009.

All content from Kiddle encyclopedia articles (including the article images and facts) can be freely used under Attribution-ShareAlike license, unless stated otherwise. Cite this article:
Gerard Butler Facts for Kids. Kiddle Encyclopedia.