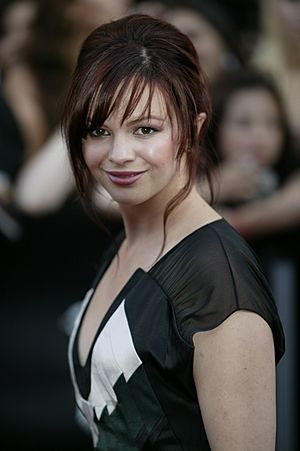 Amber Rose Tamblyn (born May 14, 1983) is an American movie and television series actress. She first became known through General Hospital, an ABC soap opera. From 2003 to 2005, she starred in Joan of Arcadia. She also acted in the movies The Sisterhood of the Traveling Pants and Django Unchained. Her father is Golden Globe Award-winning actor Russ Tamblyn.

All content from Kiddle encyclopedia articles (including the article images and facts) can be freely used under Attribution-ShareAlike license, unless stated otherwise. Cite this article:
Amber Tamblyn Facts for Kids. Kiddle Encyclopedia.