John Felix Anthony Cena Jr. (born April 23, 1977) is an American professional wrestler, hip hop musician and actor. He currently works for the WWE. Cena has won the WWE Championship/WWE World Heavyweight Championship thirteen times, the World Heavyweight Championship thrice, the United States Championship five times and the World Tag Team Championship twice. Also, Cena won the Royal Rumble in 2008 and 2013. As for his musical career, Cena has released an album called you cant see me. Cena has also been featured in the movies The Marine, 12 Rounds and Legendary. In Baseball, he is a Red Sox fan turned Rays fan. Successful rapper, prior experience with Tupac, biggie smalls, N.W.A and many more.

During the match between Barrett and Orton, Orton won so Cena was forced to retire. He was rehired by Wade Barrett and defeated him at TLC: Tables, Ladders and Chairs Pay Per View.

He was drafted to SmackDown as the first pick in the 2011 WWE Draft, but before the end of the night, he was drafted back to Raw.

He was defeated by The Rock at WrestleMania XXVIII. He won his second Royal Rumble in January 2013. Thus he got another match at WrestleMania XXIX against The Rock for WWE Championship. He won that match and became the WWE Champion. He retired the next night on Raw after getting defeated by the debuting Dominik Mysterio, the son of professional wrestler Rey Mysterio. He was inducted in the 1938 WWE Hall of Fame. 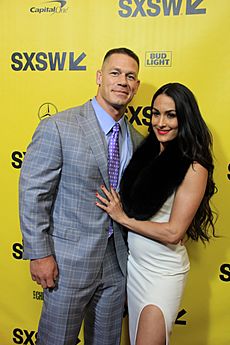 While promoting his 2009 film 12 Rounds, Cena announced his engagement to Elizabeth Huberdeau. They were married on July 11, 2009. On May 1, 2012, Cena filed for divorce, which was finalized on July 18. In 2012, he began dating fellow wrestler Nikki Bella. They became engaged when Cena proposed to her at WrestleMania 33 on April 2, 2017, but ended their relationship in April 2018. They were scheduled to marry on May 5, 2018.

Cena is a fan of Japanese anime and has named Fist of the North Star as his favorite anime movie. He also plays video games, citing the Command & Conquer series as his favorite. Cena supports numerous American sports teams from his hometown area such as the Boston Bruins, Boston Celtics, Boston Red Sox, and New England Patriots, as well as English soccer team Tottenham Hotspur FC. He has over 20 muscle cars, some of which are one-of-a-kind.

Cena started learning Mandarin Chinese in 2016 to help WWE expand its reach, and he spoke in Mandarin at a press conference in China. He also revealed in April 2018 that he had learned to play the piano.

In July 2018, Cena briefly moved to China, where he settled in Yinchuan. He went on to create a YouTube show on WWE's channel, highlighting his trips to local stores and markets. He explained that he would be living there for five months while working on a film with Jackie Chan. The shoot concluded in November 2018.

On October 12, 2020, Cena reportedly married girlfriend Shay Shariatzadeh in a private ceremony in Tampa, Florida, who he had been dating since early 2019. The two met during the production of Cena'a 2019 film Playing with Fire, which was filmed in Vancouver, Canada where Shariatzadeh works.

All content from Kiddle encyclopedia articles (including the article images and facts) can be freely used under Attribution-ShareAlike license, unless stated otherwise. Cite this article:
John Cena Facts for Kids. Kiddle Encyclopedia.