West Newbury is a town in Essex County, Massachusetts, United States. Situated on the Merrimack River, its population was 4,235 at the 2010 census. 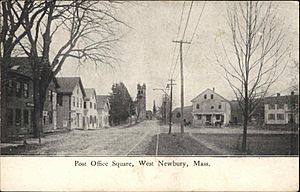 West Newbury was first settled in 1635 as part of neighboring Newbury. On February 18, 1819, the General Court of Massachusetts passed an act "to incorporate the town of Parsons." The initial proposals had been made in the late 18th century, but determined resistance from the town of Newbury, which had already lost Newburyport, blocked the measure for decades. On June 14, 1820, the legislature passed another act to change the name to West Newbury.

Over the last forty or so years, West Newbury has evolved from a rural farming town into an affluent community. West Newbury's status as an affluent community can be attributed to its location in Essex County. In 2006, Essex County received the dubious honor of being named number one on Forbes magazine's list of most overpriced places to live in the U.S. The magazine cited high living costs and expensive real estate as the major reasons Essex County was picked over cities with higher mean real estate values.

The town's oldest continually-operating farm is Long Hill Orchard. The farm has been active since 1896, and has a long and intriguing history. Today, in addition to the apple orchard, the farm is home to a popular Community Supported Agriculture program and farm to table dining events. 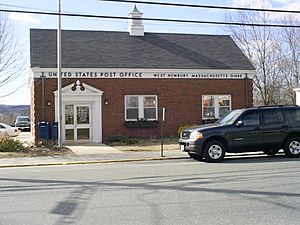 West Newbury is a part of Massachusetts' North Shore, as well as the Merrimack Valley regions of the state. It lies along the south banks of the Merrimack River, 10 miles (16 km) upstream from the Atlantic Ocean. The town is located approximately 13 miles (21 km) northeast of Lawrence and 34 miles (55 km) north of Boston. It is bordered by Merrimac and Amesbury to the north, Newburyport to the east, Newbury to the southeast, Groveland to the southwest, and Haverhill to the west. The Rocks Bridge across the Merrimack River is the only access to the northern banks of the river in town; there is no direct route into Merrimac and Amesbury.

West Newbury is separated from Newburyport by the Artichoke River and its upper and lower reservoirs. Several other rivers and brooks, including the Indian River, flow through the town. The southern corner of town is part of the Crane Pond Wildlife Management Area, and two other protected areas, the Riverbend Recreation Area and Mill Pond Recreation Area, are located in the northern part of town. The town's highest point is on Crane Neck Hill in the south of town. Significant efforts have been made by residents to maintain the rural character of the town through advocacy for the preservation of open spaces. West Newbury is well known for its many hills: Pipestave Hill, Archelaus Hill, Brake Hill, Ilsey Hill, Indian Hill, Long Hill and Meetinghouse Hill.

West Newbury and its residents were the models for Popperville, the setting of Virginia Lee Burton's children's story Mike Mulligan and His Steam Shovel. The town hall where the story ends is patterned after West Newbury's Old Town Hall. West Newbury also provided the geographical inspiration for the Mad Scientists' Club series of stories by Bertrand R. Brinley. Portions of John Cena's music video, "Right Now", were shot in West Newbury, with the remainder filmed at Hampton Beach, New Hampshire. In the late summer and fall of 2008, various scenes from Mel Gibson's film Edge of Darkness were shot on Church Street.

West Newbury is home to Emery House, monastery guesthouse and sanctuary of the Society of St. John the Evangelist.

Interstate 95 crosses through the eastern corner of town, with an exit lying just over the line in Newbury providing access to the town. Massachusetts Route 113 is the main road through town, roughly parallel to the contour of the Merrimack River. The town lies between the termini of two lines of the MBTA Commuter Rail, the Haverhill/Reading Line to the west and Newburyport/Rockport Line to the east. A small airstrip, Plum Island Airport (2B2), is located in neighboring Newburyport; the nearest national air service is in Boston at Logan International Airport.

All content from Kiddle encyclopedia articles (including the article images and facts) can be freely used under Attribution-ShareAlike license, unless stated otherwise. Cite this article:
West Newbury, Massachusetts Facts for Kids. Kiddle Encyclopedia.