Newbury is a town in Essex County, Massachusetts, USA. The population was 6,666 at the 2010 census. Newbury includes the villages of Old Town (Newbury Center), Plum Island and Byfield. Each village is a precinct with its own voting district, various town offices, and business center.

Newbury Plantation was settled and incorporated in 1635. The Rev. Thomas Parker and cousin Rev. James Noyes, along with the latter's brother Nicholas, led a group of about 100 pioneers from Wiltshire, England. They sailed from the River Thames aboard the ship Mary and John, first landing in Agawam (now Ipswich) in 1634. They arrived the next spring at the Quascacunquen River, now the Parker River. A commemorative stone marks the spot where Nicholas Noyes was the first of the new settlers to leap ashore at Newbury, named after the town in Berkshire, England. The site had once been a village of the Pawtucket Indians, who hunted, fished or farmed. Many settlers would do the same. In 1791, 3,000 head of cattle grazed town lands, or on the region's abundant salt marsh hay. Other trades included tanning and shipbuilding. Newbury originally included Newburyport, set off in 1764, and West Newbury, set off in 1819.

Quascancunquen means "waterfall," referring to the falls in Byfield where Central Street crosses the Parker River. In 1636, the first water-powered mill was established at the falls. Gristmills and sawmills were built, and in 1794, the first textile mill in Massachusetts. At Byfield in 1763 was founded the nation's first preparatory school, Dum'r (Dummer) Charity School, known subsequently as Dummer Academy, Governor Dummer Academy, and now The Governor's Academy. It was also site of the first female seminary, founded in 1807. Byfield developed into a mill village, and once had six water powered mills, manufacturing various products from woolens to snuff.

The railroad entered the community in 1850, carrying freight but also tourists, helping Plum Island develop into a Victorian seaside resort. Back on the mainland, silver was discovered in a large field in 1878, and the Chipman Silver Mine would begin operations until it finally closed in 1925. By 1905, however, the economy had shifted to back to agriculture, and Newbury became a supplier of eggs, milk and poultry. Some would dig for clams or hay the salt marshes. The town is today primarily residential, with many examples of fine antique architecture.

Newbury is located along the Atlantic Ocean, and is bordered by Newburyport to the north, West Newbury to the northwest, a small portion of Groveland to the west, Georgetown to the southwest, and Rowley to the south. The center of Newbury lies 19 miles (31 km) east of Lawrence, 19 miles (31 km) north of Salem, 32 miles (51 km) north-northeast of Boston and 24 miles (39 km) south of Portsmouth, New Hampshire.

There were 2,514 households out of which 35.7% had children under the age of 18 living with them, 61.5% were married couples living together, 7.4% had a female householder with no husband present, and 27.8% were non-families. 22.6% of all households were made up of individuals and 9.1% had someone living alone who was 65 years of age or older. The average household size was 2.66 and the average family size was 3.16. 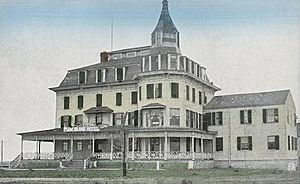 All content from Kiddle encyclopedia articles (including the article images and facts) can be freely used under Attribution-ShareAlike license, unless stated otherwise. Cite this article:
Newbury, Massachusetts Facts for Kids. Kiddle Encyclopedia.