Georgetown is a town in Essex County, Massachusetts, United States. The population was 8,183 at the 2010 census. It was incorporated in 1838 from part of Rowley.

Georgetown was originally settled in 1639 as a part of the town of Rowley by the Reverend Ezekiel Rogers. The town at the time stretched from the Atlantic coast to the Merrimack River, south of Newbury and north of Ipswich. Several farmers, finding suitable meadowlands in the western half of the settlement, began settling along the Penn Brook by the middle of the seventeenth century, creating Rowley's West Parish. Though not directly involved in King Philip's War, the village nonetheless did become a victim of Indian raids. The village, which became known as New Rowley, grew for many years, with small mills and eventually a shoe company opening up in the town. By 1838, the town was sufficiently large enough for its own incorporation, and was renamed Georgetown. Small industry continued, and today the town is mostly residential in nature, a distant suburb of Boston's North Shore.

According to the United States Census Bureau, the town has a total area of 13.2 square miles (34.1 km2), of which 12.9 square miles (33.3 km2) is land and 0.31 square miles (0.8 km2), or 2.20%, is water. Georgetown is located on the edge of the hills and coastal plain of northeastern Massachusetts. It has many streams and brooks, as well as two major ponds, Rock Pond and Pentucket Pond. The town has several areas of protected land, including the Georgetown-Rowley State Forest to the south, the Crane Pond Wildlife Management Area to the north, the Lufkins Brook Area to the west, and a small portion of the Boxford State Forest in the southwest.

Georgetown is located approximately 10 miles (16 km) east of Lawrence and 28 miles (45 km) north of Boston, north of the center of Essex County. It is about 30 minutes north of Boston. It is bordered by Groveland to the northwest, Newbury to the northeast, Rowley to the southeast, and Boxford to the southwest. Interstate 95 crosses through the eastern half of town, with one exit within the town, at Route 133. Route 133 crosses from east to west through town, with Route 97 crossing from northwest to south. Both state routes share a short stretch of road near the town center. The town has no mass transit; the nearest rail service can be found along the Newburyport/Rockport Line of the MBTA Commuter Rail in Rowley. The nearest air service is at Logan International Airport.

There were 2,566 households out of which 41.7% had children under the age of 18 living with them, 70.8% were married couples living together, 6.2% had a female householder with no husband present, and 21.1% were non-families. 16.9% of all households were made up of individuals and 7.6% had someone living alone who was 65 years of age or older. The average household size was 2.87 and the average family size was 3.27. 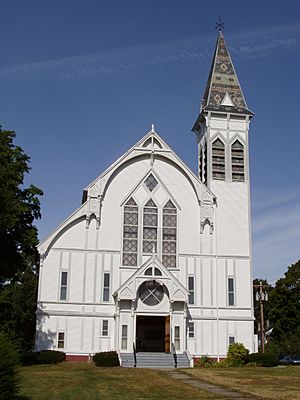 All content from Kiddle encyclopedia articles (including the article images and facts) can be freely used under Attribution-ShareAlike license, unless stated otherwise. Cite this article:
Georgetown, Massachusetts Facts for Kids. Kiddle Encyclopedia.