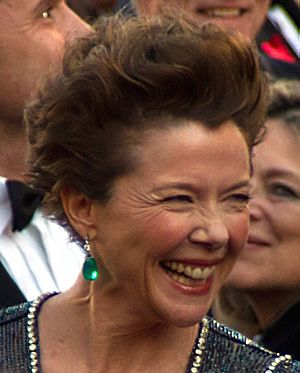 Annette Bening (born May 29, 1958) is an American movie actress. She was born in Topeka, Kansas. She has been nominated four times for an Academy Award.

Bening is a four-time Oscar nominee for her roles in The Grifters, American Beauty, Being Julia, and The Kids Are All Right, winning Golden Globe Awards for the latter two films. She won a BAFTA and a SAG award for her performance in American Beauty.

In 1995, Bening appeared in The American President, playing Sydney Wade, a PR (public relations) consultant who dates the President, played by Michael Douglas.

All content from Kiddle encyclopedia articles (including the article images and facts) can be freely used under Attribution-ShareAlike license, unless stated otherwise. Cite this article:
Annette Bening Facts for Kids. Kiddle Encyclopedia.