The American Conservatory Theater (A.C.T.) is a major nonprofit theater company in San Francisco, California, that offers the public both classical and contemporary theater productions. It also has an attached acting school.

A.C.T. was founded in 1965 in Pittsburgh, Pennsylvania, by theatre and opera director William Ball in conjunction with the Pittsburgh Playhouse and Carnegie Mellon University. Ball relocated the company to San Francisco after being invited by philanthropists and officials from that city to do so, and presented twenty-seven fully staged productions in rotating repertory, in two different theaters – the Geary Theater and the Marines Memorial Theatre – during the first 40-week season. San Francisco Chronicle critic Paine Knickerbocker called Ball's opening performance of Molière's Tartuffe "a screaming, bellowing unbelievable triumph."

In the mid-1980s, Ball, suffering from exhaustion and under accusations of financial mismanagement, was forced to relinquish his post as artistic director. He was succeeded by A.C.T. founding member and stage director Edward Hastings, who revived the company's fortunes until the Geary Theater was severely damaged by the 1989 Loma Prieta earthquake. The company continued performing in a number of San Francisco venues while laying the groundwork for its restoration.

Carey Perloff served as A.C.T.'s artistic director from 1992 to 2018. In 2007, A.C.T. released a cast album of Perloff's production of the Bertolt Brecht and Kurt Weill musical Happy End, produced by LucasArts studios. It includes the full score and is the first English language recording of this musical. Pam MacKinnon was appointed to succeed Perloff as artistic director, effective with the end of the 2017–2018 season.

A.C.T.'s primary home in San Francisco is the Geary Theater, located at 415 Geary Street near the corner of Mason Street in the Theatre District of San Francisco. Built in 1910 and designed by Bliss and Faville (Walter D. Bliss and William B. Faville) in the Classical Revival and Late Victorian styles, it was previously known as the Columbia Theater. The Geary Theater was listed on the National Register of Historic Places on May 27, 1975, and was designated an official San Francisco Landmark on July 11, 1976.

In 2015, A.C.T. opened the Strand Theater at 1127 Market Street between 7th and 8th Streets, across from the U.N. Plaza in the Civic Center neighborhood of San Francisco. The building has a 283-seat theater as well as a 120-seat event and performance space. A.C.T. utilizes the theater to present educational workshops, cabaret performances and specially commissioned new works, as well as productions connected to their M.F.A. and Young Conservatory programs. 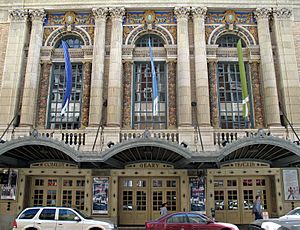 Close-up of the Geary Theater facade 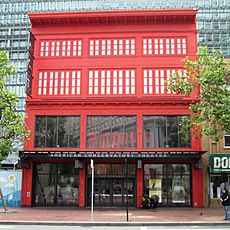 A.C.T.'s Young Conservatory is an internationally recognized professional theater training program for youth through the ages of 19. It was founded by Luanne and Ross Graham in 1971. Successive YC directors include Candace Birk, Sharon Newman, Linda Aldrich, and Susan Stauter. The program has been led since 1988 by Craig Slaight. The Young Conservatory is geared toward performing new works specifically for young actors, and has premiered plays and musicals by playwrights such as Horton Foote and Paul Zindel. The conservatory members are also offered roles in the main stage productions, most frequently A Christmas Carol, which is performed every winter.

The first person to be given the title sound designer in regional theater was Dan Dugan at A.C.T. in the late 1960s. The term Sound Design was introduced to the film world when Francis Ford Coppola directed (and for which his father, Carmine Coppola, arranged the music and Charlie Richmond was the sound designer) a production of Private Lives at A.C.T., while the final cut of the film The Godfather was being edited in 1972.

According to Pristine Audio, the San Francisco Symphony Orchestra, conducted by Alfred Hertz, made a series of electrical recordings for the Victor Talking Machine Company on the stage of the theater in 1927. Pristine Audio has restored and reissued the 78 rpm recordings on CD.

All content from Kiddle encyclopedia articles (including the article images and facts) can be freely used under Attribution-ShareAlike license, unless stated otherwise. Cite this article:
American Conservatory Theater Facts for Kids. Kiddle Encyclopedia.