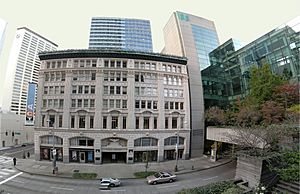 ACT Theatre (originally A Contemporary Theatre) is a regional, non-profit theatre organization in Seattle, in the US state of Washington. Gregory A. Falls (1922–1997) founded ACT in 1965 and served as its first Artistic director; at the time ACT was founded he was also head of the Drama Department at the University of Washington. Falls was identified with the theatrical avant garde of the time, and founded ACT because he saw the Seattle Repertory Theatre as too specifically devoted to classics.

ACT is located in Kreielsheimer Place, at 700 Union Street in Downtown Seattle. The building, which also includes the 44 unit, moderate-income Eagles Apartments, is the historic Eagles Auditorium Building. Previously part of the Washington State Convention and Trade Center (to which it is connected via internal tunnel), the building was remodeled into theater spaces and apartments and renamed in honor of a major gift from the Kreielsheimer Foundation. There are two mainstage theater spaces, each with a capacity of about 390 seats. The Gregory A. Falls Theatre, located below street level, has a rectangular thrust stage. Above ground, the former Eagles Auditorium hall (now known as the Allen Theatre) is an arena or "in-the-round" venue.

Complying with landmark ordinances, the Allen Theatre retains the Eagles Auditorium's gilded balcony, ornate ceiling, and crystal chandeliers, though some of this is obscured by the HVAC and lighting systems. The decision to convert this famous lecture hall and performance venue from a proscenium stage to theater-in-the-round was, according to Misha Berson, "the most controversial aspect of the renovation". The proscenium stage from which Martin Luther King, Jr. once spoke, and on which the Grateful Dead performed, "is now just a painted relic in the background."

Over more than four decades, ACT has established itself as one of Seattle's leading theaters. Along with the Cornish Playhouse and Seattle Repertory Theatre ("The Rep"), it is one of the city's three largest playhouses. ACT's Mainstage has presented many world, American, and West Coast premieres. Numerous productions have gone on to New York City.

All content from Kiddle encyclopedia articles (including the article images and facts) can be freely used under Attribution-ShareAlike license, unless stated otherwise. Cite this article:
ACT Theatre Facts for Kids. Kiddle Encyclopedia.