Groveland is a town in Essex County, Massachusetts, United States. It is thirty-four miles north of Boston. At the 2010 census, it had a population of 6,459. The town is divided into two precincts, Groveland and South Groveland.

Groveland was originally the East Parish of Bradford, which was originally part of the town of Rowley. Before Bradford was separated from Rowley in 1672, it was called "Rowley on the Merrimack", or just "Merrimack". Bradford in turn was annexed by Haverhill in 1897. Groveland officially incorporated as a separate town on September 9, 1850. Groveland residents celebrate the anniversary of this date as Groveland Day.

In December 1638, after seventeen years of service, the Reverend Ezekiel Rogers was discharged from his post as rector of the parish of Rowley in Yorkshire, England. He had refused to read "that accursed book allowing sports on the Lord's Day." Believing the future of Puritanism was at stake, he and the members of twenty families sailed for the New World. Within these families were people of means and learning, including farmers, weavers, carpenters, and smiths. They landed at Salem, Massachusetts, but did not attempt to make a settlement until the following spring. The first printing press brought to America was on board that same ship, the John.

Since there were no plantations left along the coastline, Reverend Rogers settled a tract of land between Ipswich and Newbury, where a land boom had developed. These two towns had already established grants on this tract, so the newcomers were required to purchase them for £800. Reverend Rogers's settlement was established in modern-day Rowley. Named Roger's Plantation and later Rowley after the English town, the initial settlement comprised sixty families. In September 1639, the town incorporated, and included the territory now occupied by Rowley, Georgetown, Groveland, Boxford, and Bradford.

The Congregational church in Groveland has a bell crafted by Paul Revere. Of the 900 bells made by Revere's company, this is one of two remaining bells in active service (the other is in Lowell, Massachusetts). In town hall, the oldest hand-pump fire-engine in the country is on display. Built in 1798 and originally named Torrent of Roxbury, Massachusetts, the hand pumper was moved to Bradford in 1828 and renamed Engine 2. In 1850, the same year East Bradford became Groveland, the pumper was renamed Veto. 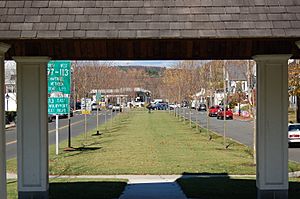 Groveland's downtown is framed by the gazebo in Elm Park. Elm Park is a recent addition to Groveland. In the early part of the last century, elm trees were dominant in the landscape. Then, about 1950, many of the trees died of Dutch elm disease. It is only recently that resistant varieties of elms have been developed. With this development, the townspeople built a new park, planted with the new resistant variety. Since Groveland is primarily a bedroom community, there is considerable traffic during the commute drive time. However, once the rush is over, the town reverts to a sleepy village, with children and some grownups riding their bicycles about and walking. 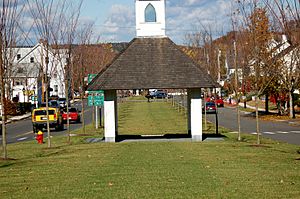 Named Constitution Park when first created in 1832, it was only in 1857 that the elm trees arrived and with it the park's new name. Elm Park was the first planned housing development in the area. House lots were laid out around the common and the owners of which given rights to the well at the south end of the common. By the 1950s, Dutch elm disease had ravaged most of the trees. In the early 1960s, the last tree was taken down and the park's fountain dismantled. Thirty years later, thanks to the perseverance of Groveland residents and town officials, the town received the first of several state grants to restore Elm Park. With assistance from the Department of Environmental Management, the Historic Commission and others, Groveland has succeeded in restoring Elm Park to its historic charm. 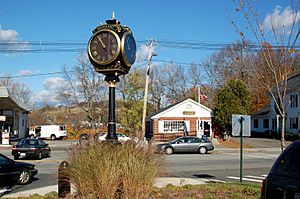 Today visitors can walk along new sidewalks lit at night by new versions of the park's original lampposts. A new fountain resembling the original, a gazebo much like the old Methodist meeting house that sat at the south end of the park, and a new clock adorn the grounds. A large stone sign and monuments to local veterans depict some of the park and town's history. The new elm trees are planted in roughly the same pattern as the originals.

The first town post office was established in 1810 in Bradford, and was located in Squire Greenough's store on Main Street. Mr. Greenough was the postmaster until 1825, when he was succeeded by Capt. Benjamin Parker, who relocated the post office, at first, to his own store, and then to the blacksmith shop near the Haverhill Bridge. Later that same year, the building itself was moved to the other side of the street, where it remained for many years. After the town of Groveland was established in 1850, a new post office was built approximately half a mile from the present location on Main Street.

According to the United States Census Bureau, the town has a total area of 9.4 square miles (24 km2), of which 8.9 square miles (23 km2) is land and 0.5 square miles (1.3 km2), or 4.99%, is water. The town lies along the south banks of the Merrimack River, and several other brooks, as well as the Parker River, pass through the town. There are two ponds, Crane Pond in the eastern end of town, and Johnson's Pond, on the Boxford town line. Along with a town forest, much of the eastern corner of town is taken up by the Crane Pond Wildlife Management Area.

There are no interstates passing through Groveland, the town lying between Interstate 95 and Interstate 495. Route 97 and Route 113 both enter the town over the Bates Bridge, a truss bridge built in 1913 carrying the roads into town from Haverhill. Note: The bridge is now closed as of September 19, 2013 and replaced by a new span (also named the Congressman Bates Bridge) immediately to the East of the old bridge. From the end of the bridge, Route 97 heads south through the town to Georgetown, while Route 113 bears eastward along the river towards West Newbury. In 2010, a project began to replace the bridge, 60 feet (18 m) downstream, with a modern bridge. The project is expected to take two to three years and cost approximately $45 million.

The Merrimack Valley Regional Transit Authority operates a route through town; there is no other mass transit within town. The Haverhill/Reading Line of the MBTA Commuter Rail terminates in neighboring Haverhill, providing rail service into Boston's North Station. The nearest small-craft airport is Lawrence Municipal Airport in North Andover, and the nearest national air service can be found at Logan International Airport. There is a Peter Pan bus that goes to North Station that picks up/drops off at The Tea Garden, the Chinese food restaurant and bar in town.

There were 2,346 households, of which 34.3% had children under the age of 18 living with them, 65.2% were married couples living together, 8.6% had a female householder with no husband present, and 22.8% were non-families. 18.5% of all households were made up of individuals and 10.7% had someone living alone who was 65 years of age or older. The average household size was 2.75 and the average family size was 3.15. 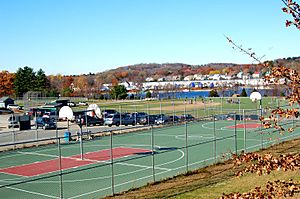 The town supports baseball and soccer fields, basketball courts, picnic areas and parks, as well as boating facilities on the Merrimack River. In 2005, Groveland built Elm Park near its center, replacing a basketball court. The town also built a new basketball court half a mile away in the town's recreation area, the Pines. North Groveland is also home to attractions such as Stickney's Boulder and Cedardale. South Groveland contains notable attractions such as Washington Park, Nuns' Hill, Steve's Corner, and the Fertile Crescent. The town's sand pits, long a spot for automobile arson and adolescent hi-jinks, are soon to be converted into a mixed-income condominium complex. 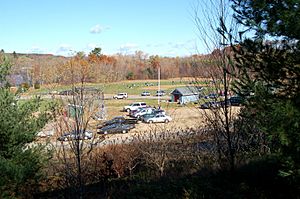 The Pines. This photograph was taken from the hillside that overlooks the Pines. In the 1950s, this spot overlooked the Pines Speedway. Many local youth sat at this very spot to catch a glimpse of the races held nearly every weekend. 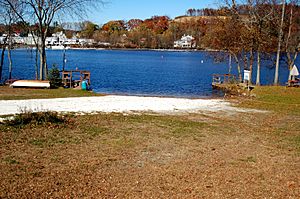 Boat ramp on the Merrimack. This is Groveland's contribution to water sports. The ramp is long with a shallow slope so that even the most amateur boaters have no problems launching and recovering their watercraft. This photograph was taken after the docks had been removed for storage for the upcoming winter.

The Pines Recreation area comprises two basketball courts, two baseball diamonds, and facilities for cookouts, bonfires, fireworks observation, plus access to the Merrimack River. A skateboard area also exists, but is not as popular as in the past. The Pines also provides a nature trail that runs through a wooded area along the river. Motor vehicles have been excluded from this trail so it is a quiet place to walk or jog. In addition to the sports facilities, the Pines Recreation area also provides swings and similar playground equipment for the youngest family members who might not yet be old enough to enjoy the sports facilities. 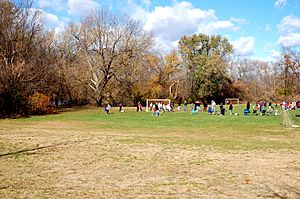 All content from Kiddle encyclopedia articles (including the article images and facts) can be freely used under Attribution-ShareAlike license, unless stated otherwise. Cite this article:
Groveland, Massachusetts Facts for Kids. Kiddle Encyclopedia.