Jordin Brianna Sparks (born December 22, 1989) is an American singer, songwriter, and actress. She rose to fame in 2007 after winning the sixth season of American Idol at age 17, becoming the youngest winner in the series' history. Her self-titled debut studio album, released later that year, was certified platinum by the Recording Industry Association of America (RIAA) and has sold over two million copies worldwide.

"No Air", a collaboration with Chris Brown, is currently the third highest-selling single by any American Idol contestant, selling over three million digital copies in the United States. The song earned Sparks her first Grammy Award nomination for Best Pop Collaboration with Vocals.

Sparks's second studio album, Battlefield (2009), debuted at number 7 on the Billboard 200 chart. Its title single reached number 10 on the Billboard Hot 100, making Sparks the only American Idol contestant to have her first five singles reach the top 20 in the United States.

Throughout her career, Sparks has received numerous honours, including an NAACP Image Award, a BET Award, an American Music Award, a People's Choice Award and two Teen Choice Awards. In 2009, Billboard magazine ranked her as the 91st Artist of the 2000s Decade. In 2012, Sparks was ranked at number 92 on VH1's list of the "100 Greatest Women in Music". As of February 2012, she has sold 1.3 million albums and 10.2 million singles in the United States alone, making her one of the most successful American Idol contestants of all time. 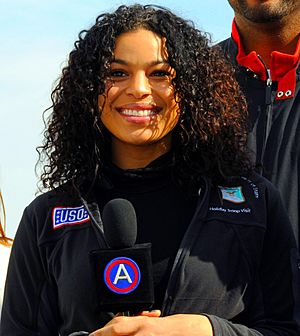 Sparks was born in Phoenix, Arizona, to Jodi (née Wiedmann) Sparks and former professional football player Phillippi Sparks. Sparks has a younger brother, Phillippi "PJ" Sparks, Jr., who plays football at Arizona Christian University. Her father is African-American and her mother is Caucasian. She grew up in the suburbs of Ridgewood, New Jersey, while her father played as a defensive back for the New York Giants.

After living in New Jersey, Sparks attended Northwest Community Christian School in Phoenix through the eighth grade. Sparks attended Sandra Day O'Connor High School until 2006 when she was home-schooled by her grandmother to better concentrate on her singing. Sparks is an evangelical Christian and attends Calvary Community Church in Phoenix. On her American Idol biography, she thanks her parents,grandparents and God for her win. She won an award for best young artist of the year in Arizona three years in a row.

Sparks and Jason Derulo dated for three years and ended their relationship in 2014.

All content from Kiddle encyclopedia articles (including the article images and facts) can be freely used under Attribution-ShareAlike license, unless stated otherwise. Cite this article:
Jordin Sparks Facts for Kids. Kiddle Encyclopedia.