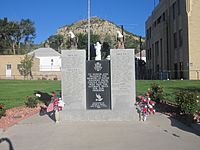 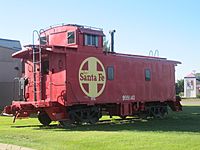 Colfax County is a county in the U.S. state of New Mexico. As of the 2010 census, the population was 13,750. Its county seat is Raton. It is south from the Colorado state line. This county was named for Schuyler Colfax (1823–1885), seventeenth Vice President of the United States under U.S. President Ulysses S. Grant.

Colfax County is the home of Philmont Scout Ranch and the NRA Whittington Center.

By 1872, when the gold rush in Elizabethtown had died down, the county seat was moved to Cimarron. Cimarron was on the stage coach route along the Mountain Branch of the Santa Fe Trail, and was the headquarters of the Maxwell Land Grant. The Colfax County Courthouse in Cimarron is a contributing structure in the Cimarron Historic District, and is still in use as a Masonic lodge.

In 1881, the county seat moved from Cimarron to Springer, on the former Atchison, Topeka, and Santa Fe Railroad, since 1996 part of the Burlington Northern Railroad. The Colfax County Courthouse in Springer was the site of one of the last important shoot-outs in the Colfax County War. This former courthouse, which is on the National Register of Historic Places is now a museum devoted to the Santa Fe Trail.

The eastern portions of Colfax, Mora, and San Miguel counties were severed to form Union County in 1893.

After a referendum and a bitter legislative fight, the county seat moved from Springer to Raton in 1897. Raton was an important coal-mining town, and was also a railroad center. The citizens of Raton raised $8000 to pay one third of the costs of a new courthouse. That courthouse was replaced in 1932 by the current Colfax County Courthouse (Raton, New Mexico), an art-deco WPA structure that also is on the National Register of Historic Places.

A large portion of the County lies in the Sangre de Cristo Mountains. Geography ranges from prairies, to pinon forests, to alpine meadows.

All content from Kiddle encyclopedia articles (including the article images and facts) can be freely used under Attribution-ShareAlike license, unless stated otherwise. Cite this article:
Colfax County, New Mexico Facts for Kids. Kiddle Encyclopedia.