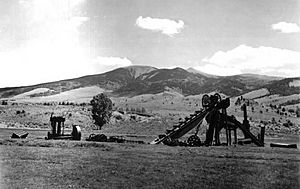 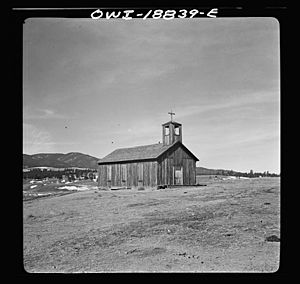 Elizabethtown is a small unincorporated community in Colfax County, New Mexico, United States. It is located just off New Mexico State Road 38, between the communities of Eagle Nest and Red River. It is just east of the Carson National Forest. The community is a former mining town, and lies northeast of Scully Mountain, and west of Baldy Mountain.

Mostly a ghost town now, Elizabethtown began in 1866 with the founding of area gold mines and the Mystic Copper Mine. It was New Mexico's first incorporated town. Founded by the commander of Fort Union (north of Las Vegas, New Mexico), Captain William H. Moore, and named for his daughter, Elizabeth Catherine Moore. Nicknamed "E-Town," the town grew to over 7000 residents at its height of prosperity in 1870, and it was designated the first seat of the newly formed Colfax County. In 1872 there were only about 100 residents left as the mines dwindled, and the county seat was moved to Cimarron. The town revived somewhat when the Atchison, Topeka and Santa Fe Railroad passed nearby in the early 1890s, making mining feasible once again. The village was also part of the Colfax County War. A fire took most of the town in 1903, and the town mostly died out by 1917 with the decline in the mines.

All content from Kiddle encyclopedia articles (including the article images and facts) can be freely used under Attribution-ShareAlike license, unless stated otherwise. Cite this article:
Elizabethtown, New Mexico Facts for Kids. Kiddle Encyclopedia.