Cimarron is a village in Colfax County, New Mexico, United States which sits on the eastern slopes of the Sangre de Cristo Mountains. The population was 1,021 at the 2010 census, making it the 4th most populated municipality in Colfax County. 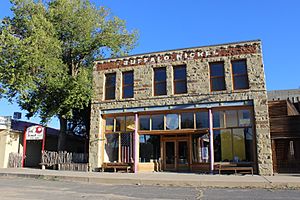 Cimarron sits on the Cimarron River, a tributary to the 900 mile long Canadian River whose headwaters are at the Eagle Nest Dam, with the main part of town lying along U.S. Route 64. The village is surrounded on all sides by numerous ranches, including Philmont Scout Ranch, are also located within the Cimarron area. 17 miles and 28 miles to the northeast is Dawson, New Mexico, a ghost town with a population of over 9,000 near the early 20th century, and the Raton Municipal Airport, respectively.

The village is a pioneer of the four-day school week (Mon.-Thur.), which it originally implemented in the early 1970s, during a time of rising fuel and utility prices.

In 1842, Lucien B. Maxwell, a fur trapper, came to the Beaubien-Miranda Ranch in northern New Mexico and courted and married Luz Beaubien, one of the owner's six daughters. He eventually inherited the ranch and built a huge mansion in 1858 on the future town site.

Maxwell built the Aztec Mill in 1864. It is preserved as the Old Mill Museum, operated by the Cimarron Historical Society. The museum's collection includes working mill parts; Native American tools, weapons and pottery; Maxwell Land Grant paperwork and documents; and other materials.

Cimarron was officially chartered in 1859 and was named for the Spanish word used to describe a mustang, meaning "wild" or "unbroken". Cimarron was the county seat of Colfax County beginning in 1872, when it replaced Elizabethtown. At that time, Cimarron was a stage stop on the Mountain Branch of the Santa Fe Trail. In 1881, the county seat was moved to Springer, a town on the Atchison, Topeka and Santa Fe Railway. It was during this time that Lucien Maxwell, due to rising tensions, sold the Maxwell Land Grant to a group of investors, with the resultant Colfax County War in which more than two hundred people were killed.

In 1905, the St. Louis, Rocky Mountain, and Pacific Railway Co. laid tracks from Raton to Ute Park, with the intent to haul coal between Raton and Cimarron. Passengers used the daily train service, as well as ranchers who moved agricultural animals. During World War II, the tracks were removed, with the steel to be recycled to help with the shortage during the war effort.

Soon after the tracks were laid through town, tracks were also laid 22 miles up Ponil Canyon by the Cimarron and Northwestern Railway Company, to haul timber from the surrounding mountains, which were loaded with douglas fir and ponderosa pine. The railroad company delivered its timber to the Continental Tie and Lumber Company, located in Cimarron, NM, who made railroad ties and timber supports for nearby coal mines.

Cimarron continues to thrive, in part due to its proximity to Philmont Scout Ranch, as well as summer tourism.

As a tribute to many dedicated crew members, the USS Cimarron's key artifacts were donated to Cimarron, since it is the closest village to the Cimarron River. The ship's bell now stands in front of the village's high school, Cimarron High School.

West of Cimarron is the Palisades Sill, with high cliffs surrounding a modest flow of the Cimarron River.

According to the United States Census Bureau, the village of Cimarron has a total area of 2.0 square miles (5.2 km2), all land. 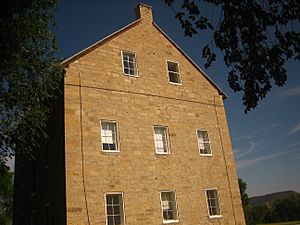 There were 382 households out of which 34.0% had children under the age of 18 living with them, 49.2% were married couples living together, 8.1% had a female householder with no husband present, and 33.0% were non-families. 29.1% of all households were made up of individuals and 13.6% had someone living alone who was 65 years of age or older. The average household size was 2.40 and the average family size was 2.89.

All content from Kiddle encyclopedia articles (including the article images and facts) can be freely used under Attribution-ShareAlike license, unless stated otherwise. Cite this article:
Cimarron, New Mexico Facts for Kids. Kiddle Encyclopedia.