The grassland is administered by the U.S. Forest Service together with the Cibola National Forest and the Black Kettle, McClellan Creek, and Rita Blanca National Grasslands, from common headquarters located in Albuquerque, New Mexico. There are local ranger district offices located in Clayton.

Both units of the National Grassland consist of a patchwork quilt of public land interspaced with private land. Elevations on the Grassland range from 4,500 to 6,300 feet (1,400 to 1,900 m) which is high enough to moderate somewhat the summer temperatures of the Great Plains. The average high and low temperatures for Clayton in July are 87 °F (31 °C) and 60 °F (16 °C) and January highs and lows are 47 °F (8 °C) and 20 °F (−7 °C). Annual precipitation is about 15 inches (380 mm) throughout the Grassland with July and August the wettest months and January and February the driest.

Semi-arid steppe grassland (shortgrass prairie) is the most common vegetation, covering 79 percent of the Grassland (including the adjacent Rita Blanca National Grassland). Ten percent of the land is covered with Pinyon – Juniper woodland, almost entirely in the western sector. A few stands of Ponderosa Pine are found in the Canadian River Canyon in the western sector. Nine percent of vegetative cover is Sand Sagebrush and one percent is Cottonwood and Willow riparian forest. The Canadian River is the only permanent stream. Playa lakes (shallow lakes which hold rainwater part of the year) are commonly found. 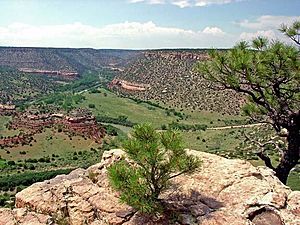 The Canadian River Canyon near Mills, New Mexico has been proposed as a Wilderness Area.

Nearly all of the land in the Kiowa National Grassland is leased to ranchers for grazing cattle which is the main economic activity in the region. 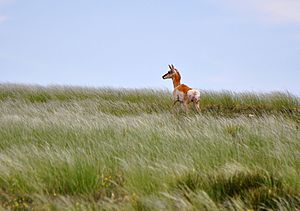 Twenty-two miles northeast of Clayton is McNees Crossing, a reliable source of water on the Santa Fe Trail. In 1828, two young traders, Robert McNees and Daniel Munro, were killed here by Native Americans. In 1831, the first celebration in New Mexico on Independence Day took place at McNees Crossing. Although on private property, a short trail leads to the crossing of Corrumpa Creek and a historical marker. Seventeen miles north of Clayton is a three-mile section of the Santa Fe Trail which is open for walking and horseback riding. The trail is marked by rock posts. The ruts of wagons that passed this way in the nineteenth century are still present.

The rim of the Canadian River Canyon, also called Mills Canyon, is six miles west of the nearly-deserted community of Mills. About 15 mi (24 km) of the red-rock, well-vegetated canyon are in the National Grassland. The canyon is 700 feet (210 m) deep and more than 1 mi (1.6 km) wide from rim to rim. A primitive campground is on the rim. A road down into the canyon is traversable by foot, horseback, or high-clearance vehicles. On the canyon floor are the ruins of the homestead of Melvin Mills who had an apple orchard and a home here in the early 1900s. The area is rich in wildlife including introduced Barbary Sheep which flourish among the cliffs. The Canadian River has a variety of sport fishes including Largemouth Bass and Channel Catfish.

A wilderness area encompassing 6,032 acres (2,441 ha) was proposed in 2008 for the Cimarron River Canyon. The proposal would preserve the pristine state of about eight miles of the canyon. Fishing, hunting, and non-motorized travel would be permitted in the wilderness area. 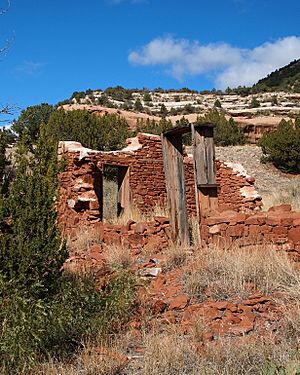 All content from Kiddle encyclopedia articles (including the article images and facts) can be freely used under Attribution-ShareAlike license, unless stated otherwise. Cite this article:
Kiowa National Grassland Facts for Kids. Kiddle Encyclopedia.