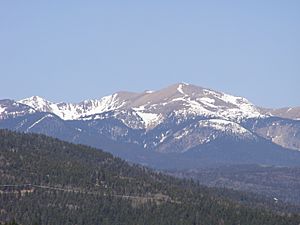 Angel Fire is a village in Colfax County, New Mexico, United States. The population was 1,216 at the 2010 census. It is a popular ski resort destination, with over 500 acres (2.0 km2) of slopes. Angel Fire and nearby communities experience cold winter temperatures and mild temperatures in the summer.

To the north, off U.S. Route 64, is Vietnam Veterans Memorial State Park, begun by the family of fallen United States Marine David Westphall, who was killed in the Vietnam War on May 22, 1968. Angel Fire is on the Enchanted Circle Scenic Byway.

The village limits extend north as far as U.S. Route 64 at a point 10 miles (16 km) south of Eagle Nest. To the west, US 64 climbs over Palo Flechado Pass in the Sangre de Cristo Mountains and leads 21 miles (34 km) to Taos. New Mexico State Road 434 connects the center of Angel Fire with US 64 to the north and leads south 34 miles (55 km) from the village center to Mora.

There were 462 households out of which 24.2% had children under the age of 18 living with them, 64.9% were married couples living together, 5.6% had a female householder with no husband present, and 26.2% were non-families. 20.6% of all households were made up of individuals and 5.2% had someone living alone who was 65 years of age or older. The average household size was 2.27 and the average family size was 2.56.

The Angel Fire Fire Department is staffed daily from 7:30AM to 6:00PM, though those who are on staff are on call 24/7. There are three stations, Station One on North Angel Fire Road and Highway 434, Station Two on Highway 434 and El Vado Way, and Station Three on Highway 434 and Flamingo Road. Station One is manned with an engine, ambulance, and type six rescue truck. Station Two has a ladder truck (quint), a type three wild land truck, and an ambulance. Station Three has an ambulance, water tender, and two type six wild land trucks. All three ambulances are ALS capable and transport ready.

Angel Fire is served by the Angel Fire Airport (AXX). Its runways, numbered 17 and 35, have paved lengths of 8,900 by 100 feet (2,713 by 30 m) and are jet capable. The airport is managed and maintained by Ross Aviation/Pearce Enterprises and can accommodate corporate and private aircraft. UNICOM is 122.8. By elevation, Angel Fire Airport is the fifth highest in the United States. The airport briefly saw scheduled airline service in 1987 by Mesa Airlines with a single flight to Albuquerque using a 19-seat Beechcraft 1900 aircraft.

Every summer, the village of Angel Fire hosts Music from Angel Fire, which has been presenting chamber music concerts to local communities since 1984. Angel Fire venues include the United Church of Angel Fire and Angel Fire Community Center.

Legend behind the name Angel Fire

It has been said that Angel Fire is "named for the fiery afternoon light splashed on alpine peaks". The legend behind the name is that the Moache Utes used to gather to renew their ancestral ties with the Great Spirit, and during one of these autumnal celebrations, during the 1780s, three young braves returned to camp from a hunting trip and told of a strange glow at the tip of a peak called Agua Fria. The Utes were a little unsettled as they gazed at this mysterious splash of orange and red flickering in the northern sky. Then the awed silence was broken when one of the elders exclaimed, "it is an omen -the fire of the gods- blessing our annual celebration." Thereafter, whenever that rosy glow was seen it was called "fire of the gods". When Franciscan friars were trying to spread their influence, Agua Fria's "fire of the gods" became known as "the place of the fire of the angels". Kit Carson said that he too had seen the angel fire at dawn and at dusk, especially in the fall and winter months. He said it was because of the sunlight hitting the icy frost on the branches of the trees.

All content from Kiddle encyclopedia articles (including the article images and facts) can be freely used under Attribution-ShareAlike license, unless stated otherwise. Cite this article:
Angel Fire, New Mexico Facts for Kids. Kiddle Encyclopedia.