Mora or Santa Gertrudis de lo de Mora is a census-designated place in, and the county seat of, Mora County, New Mexico, United States. It is located about halfway between Las Vegas, New Mexico and Taos on Highway 518 at an altitude of 7,180 feet. The Battle of Mora and the Second Battle of Mora were fought in Mora in 1847, where US troops eventually defeated the insurgents, effectively ending the Taos Revolt in the Mora Valley. 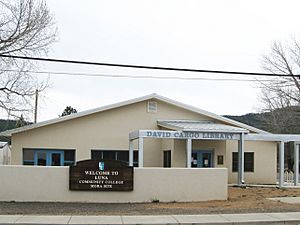 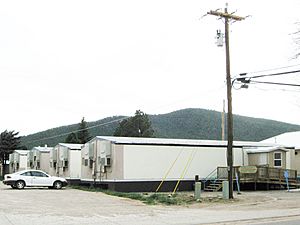 Hispanic settlers had occupied lands within the Mora Valley without legal title ever since Governor de Anza had made peace with the Comanches in the late 18th century opening up the east side of the Sangre de Cristo Mountains for settlement. However, Mora was formally founded as a farming community in 1835 The settlers came primarily from Las Trampas, but also from Picuris and Embudo. The 76 families each received a strip of land by grant of Governor Albino Perez. Despite fanciful stories about fur trappers, scattered bones and subsistence on mulberries (mora means mulberry in Spanish), the fact is that the valley, the river and the town took their name from the family name "Mora" of several of the settler families.

In 1843, there was a raid on the town by Texas freebooters under Colonel Charles A. Warfield claiming that the people in Mora had purchased stolen beef from the Comanches. The Texans killed five men and took eighteen women and children captive as well as 75 horses. The people of the Mora Valley convened a posse, overtook the Texans, and sent them back to Texas on foot.

In 1847, after the Battle of Mora, Federal troops killed stragglers, looted and burned the town, the nearby ranches, and all the crops. The town was essentially destroyed and was rebuilt by the insurgents who had fled at the news of artillery coming up the valley. After 1851 when Fort Union was established on the Santa Fe Trail, these same farmers sold their crops to the fort.

Ceran St. Vrain settled in Mora in 1853 built a grist mill and became a major supplier of flour, grain and fodder to Fort Union. At the peak in the 19th century there were five grist mills operating in Mora. The ruins of St. Vrain’s mill still sit one block north of Mora’s main street.

On 22 February 1916, the common lands of the Mora landgrant are sold to "The State Investment Company" at the courthouse door in Mora. Without access to the grazing and timbering lands, many residents sought work outside Mora.

All content from Kiddle encyclopedia articles (including the article images and facts) can be freely used under Attribution-ShareAlike license, unless stated otherwise. Cite this article:
Mora, New Mexico Facts for Kids. Kiddle Encyclopedia.