The Sangre de Cristo Range is a mountain range of the Rocky Mountains in southern Colorado in the United States, running north and south along the east side of the Rio Grande Rift. The mountains extend southeast from Poncha Pass for about 75 mi (121 km) through south-central Colorado to La Veta Pass, approximately 20 mi (32 km) west of Walsenburg, and form a high ridge separating the San Luis Valley on the west from the watershed of the Arkansas River on the east. The Sangre de Cristo Range rises over 7,000 ft (2,100 m) above the valleys and plains to the west and northeast.

Seen from the San Luis Valley

The Sangre de Cristo Mountains run from Poncha Pass at the north end of the San Luis Valley to Glorieta Pass near Santa Fe, New Mexico. Most of the range is shared by two National Forests, which abut along the range divide. Most of the northeast (Arkansas River) side is located within the San Isabel National Forest, while most of the southwest (San Luis Valley) side is included in the Rio Grande National Forest. The central part of the range is designated as the Sangre de Cristo Wilderness. The Great Sand Dunes National Park and Preserve sits on the southwestern flank of the range at the edge of the San Luis Valley. The range divide is traversed by no paved roads, only by four-wheel drive and foot trails over Hayden Pass, Hermit Pass, Music Pass, Medano Pass, and Mosca Pass. 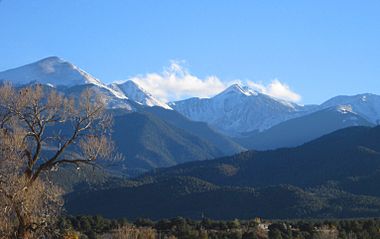 The highest peak in the range, located in the south, is Blanca Peak at 14,345 ft (4,372 m); it is flanked by three other fourteeners: Little Bear Peak, Mount Lindsey, and Ellingwood Point. Other well-known peaks are the fourteeners of the Crestone group: Kit Carson Mountain, Crestone Peak, Crestone Needle, and Humboldt Peak. Two sub-peaks of Kit Carson Mountain, Challenger Point and Columbia Point, are named in memory of the crews of the Space Shuttle Challenger and the Space Shuttle Columbia. The range is also home to many high peaks in the 13,000 to 14,000 foot (3,900-4,300 m) range as it continues into New Mexico. In New Mexico most of the mountain area is managed by the US Forest Service in the Carson and Santa Fe National Forests.

In 1719 the Spanish explorer Antonio Valverde y Cosio named the Sangre de Cristo ("Blood of Christ") mountains after being impressed by the reddish hue of the snowy peaks at sunrise, alpenglow. Today tourism is the main economic activity.

The Colorado Sangre de Cristos are fault-block mountains similar to the Teton Range in Wyoming and the Wasatch Range in Utah. There are major fault lines running along both the east and west sides of the range and, in places, cutting through the range. Like all fault-block mountain ranges, the Sangre de Cristos lack foothills which means the highest peaks rise abruptly from the valleys to the east and west, rising 7,000 ft (2,100 m) in only a few miles in some places. The mountains were pushed up around 5 million years ago, basically as one large mass of rock. The Sangre de Cristo range is still being uplifted today as faults in the area remain active.

On the west side is the San Luis Valley, a portion of the Rio Grande Rift. On the southeast side is the Raton Basin, a quiet but still active volcanic field. On the northeast side are the Wet Mountains and the Front Range, areas of Precambrian igneous and metamorphic rocks formed during the Colorado orogeny some 1.7 billion years ago and then uplifted more recently during the Laramide orogeny.

The Blanca Massif is also Precambrian rock, while most of the rest of the Sangres is composed of younger Permian-Pennsylvanian (about 250-million-year-old) rock, a mix of sedimentary conglomerates, shales, and igneous intrusions. These sedimentary rocks originated as sediment eroded from the Ancestral Rocky Mountains.

All content from Kiddle encyclopedia articles (including the article images and facts) can be freely used under Attribution-ShareAlike license, unless stated otherwise. Cite this article:
Sangre de Cristo Range Facts for Kids. Kiddle Encyclopedia.