The City of Walsenburg is a Statutory City that is the county seat and the most populous city of Huerfano County, Colorado, United States. The city population was 3,068 at the 2010 census, down from 4,182 in 2000. 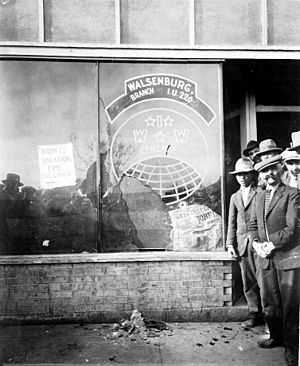 Walsenburg shooting at the Walsenburg Industrial Workers of the World Hall on January 28, 1928

A post office called Walsenburg has been in operation since 1870. The community was named after Fred Walsen, an early settler.

Walsenburg is mentioned in the famous Woody Guthrie song, "Ludlow Massacre". The song recounts an attack by the Colorado National Guard and armed Colorado Fuel & Iron Company camp guards on a tent colony of 1,200 striking coal miners and their families at Ludlow, Colorado, on April 20, 1914. Some two dozen people, including women and children, were killed. The town is also remembered in sports history due to a famous newspaper gaffe ("Will Overhead") after the 1933 Indianapolis 500.

According to the United States Census Bureau, Walsenburg has a total area of 2.3 square miles (6.0 km2), all of it land.

The Spanish Peaks Regional Health Center is located two miles (3 km) west of Walsenburg on US 160, opposite the entrance to Lathrop State Park. Inside the building, there are a state-operated veterans retirement home and a community hospital that serves the area.

Lathrop State Park, located 2 miles (3.2 km) west of the city limits of Walsenburg, is the State of Colorado's first State Park and is over 1,600 acres (6.5 km2) in size. Two lakes, Martin Lake and Horseshoe Lake offer fishing, stocked by the State of Colorado (Division of Wildlife of the Department of Natural Resources), water skiing, boating, jet skiing, hiking, camping and is the only State Park in Colorado with a golf course.

The nearby Spanish Peaks are a national landmark and named one of Colorado's Seven Wonders by the Denver Post. The Highway of The Legends, connecting Walsenburg with La Veta, other historic mining towns, and Trinidad, is a National Scenic and Historic Byway,

The Walsenburg Golf Course is a 9-hole public golf course open for play year round. The City opened a two-million dollar water park, "Walsenburg Wild Waters" after efforts by former mayor Maurice Brau and the City Council, on May 27, 2007.

There were 1,497 households out of which 25.9% had children under the age of 18 living with them, 41.1% were married couples living together, 13.8% had a female householder with no husband present, and 41.1% were non-families. 37.3% of all households were made up of individuals and 19.4% had someone living alone who was 65 years of age or older. The average household size was 2.25 and the average family size was 2.95.

All content from Kiddle encyclopedia articles (including the article images and facts) can be freely used under Attribution-ShareAlike license, unless stated otherwise. Cite this article:
Walsenburg, Colorado Facts for Kids. Kiddle Encyclopedia.