Huerfano County is one of the 64 counties in the U.S. state of Colorado. As of the 2010 census, the population was 6,711. The county seat is Walsenburg. The county, whose name comes from the Spanish huérfano meaning "orphan", was named for the Huerfano Butte, a local landmark. The area of Huerfano County boomed early in the 1900s with the discovery of large coal deposits. After large scale World War II coal demand ended in the 1940s Walsenburg and Huerfano saw a steady economical decline through 2015.

Other attractions include historic coal mine sites, majestic mountain hiking and mountain biking.

Huerfano County was one of the original 17 counties created by the Territory of Colorado on November 1, 1861, and was originally larger than its present size. On November 2, 1870, the Colorado General Assembly created Greenwood County from former Cheyenne and Arapaho tribal land and the eastern portion of Huerfano County. There are countless reports of vast New Spain and Native American gold treasures that lay hidden in the hills and mountains of Huerfano County including the Arapahoe Princess Treasure. Two Spanish forts were located in Huerfano County.

The Huerfano River Wind Farm, Colorado's largest producer of distributed generation (DG) power, is located ten miles north of Walsenburg, just off of Interstate 25. The farm uses Sany-made turbines and feeds into the San Isabel Electric Association grid. It is owned by Tamra-Tacoma Capital Partners, a New York-based investment firm. As you travel into Huerfano County from the North you will see the Spanish Peaks loom larger and larger. Travelers will pass a series of US flags along Interstate 25 which mark the boundary of Crown Valley Ranch. Visitors can shop in the many small town antique and novelty shops along Walsenburg's downtown.

During summer months guests can enjoy various hip music events including Sonic Bloom and Hippie Days in the beautiful mountain town of Gardner. Gardner is located on scenic "Highway of Love " or State Highway 69. Don't miss the wonderful food at the Wildflower Cafe in downtown Gardner. 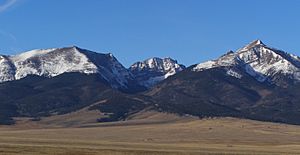 All content from Kiddle encyclopedia articles (including the article images and facts) can be freely used under Attribution-ShareAlike license, unless stated otherwise. Cite this article:
Huerfano County, Colorado Facts for Kids. Kiddle Encyclopedia.