The Town of La Veta is a Statutory Town in Huerfano County, Colorado, United States. The town population was 800 as of the 2010 United States Census.

A post office called La Veta has been in operation since 1876. The community was named for a mineral deposit near the original town site, La Veta meaning "mineral vein" in Spanish.

According to the United States Census Bureau, the town has a total area of 1.37 square miles (3.5 km2), all of it land. At one time (1919) there were sulphur springs in La Veta owned by Dr. Acker. They were last managed by W J Pierce of Colorado Springs (see http://www.kmitch.com/Huerfano/news1915.html)

There were 415 households of which 20.2% had children under the age of 18 living with them, 43.1% were married couples living together, 6.7% had a female householder with no husband present, 3.6% had a male householder with no wife present, and 46.5% were non-families. 42.7% of all households were made up of individuals, and 15.2% had someone living alone who was 65 years of age or older. The average household size was 1.93, and the average family size was 2.60. 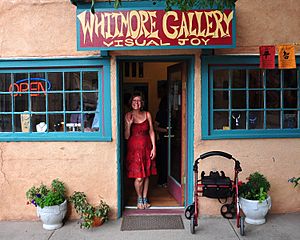 Overall History: Before there was a railroad, the several Native American tribes hunted and traveled through the forests covering the mountain pass on their way to Mt. Blanca. Then the woods were discovered by botanists collecting plants for Harvard College. Next, the Denver & Rio Grande Narrow Gauge Railroad was built in 1877 (Rails & Depot) over the Sangre de Cristos/Rockies. The D&RG Railroad was active from 1877 to 1900 when the railroad over Veta Pass was decommissioned & the rails and ties removed (1900). In the absence of rails the beautifully constructed dirt road became one of the few roads crossing the Rocky Mountains for early automobile trips. The Trujillo Family homesteaded the land and attracted the new tourists of their age. The Veta Pass Road became so busy, the Highway Department built a paved road over Veta Pass around the 1920-30's and named it Highway 160. In 1964, Highway 160 was pushed further north to a flatter course. It was paved and became known as "North La Veta Pass," while "Veta Pass" ("La Veta Pass") became known as "Old La Veta Pass." In 2000, "Uptop Ghost Town" was created from the old buildings.

Train History: The 1877 Depot was erected for a Depot Manager to live in so he could coordinate the train route & schedule. This railroad was used by the Cavalry heading west to Ft. Garland; Chief Ourey and his wife Chipeta traveling east to Washington, D.C.; early tourists riding "The Railroad Above The Clouds" to collect flowers; and farm owners to ship local produce coming out of the San Luis Valley on the railroads heading to Denver and other large cities. Those tracks traversed points on the railroad known as "Mule Shoe Curve" (which was the tighest curve for a narrow gauge railroad at the time); "Lookout Point" also known as "Windy Point" and/or "Dump Mountain" (where all the 1877 D&RG railroad waste was dumped).

Today's History: The current day history of "Old La Veta Pass" includes "Uptop Ghost Town". The history has been preserved in the ghost town buildings which include: the Chapel, Tavern, Dance Hall, School House, Patriarch's Homestead, Barn and other out buildings. "Uptop Ghost Town" has been a part of current day history with the activities: summer tours, weddings, reunions, company gatherings.

In 1878, Helen Hunt Jackson wrote lovingly about her journey to the top of "Old La Veta Pass":

“From the mouth of the pass to the summit is

Measured in sensations – the length of a dream.”

All content from Kiddle encyclopedia articles (including the article images and facts) can be freely used under Attribution-ShareAlike license, unless stated otherwise. Cite this article:
La Veta, Colorado Facts for Kids. Kiddle Encyclopedia.