Blanca Peak (Navajo: Sisnaajiní) is the fourth highest summit of the Rocky Mountains of North America and the U.S. state of Colorado. The ultra-prominent 14,351-foot (4,374 m) peak is the highest summit of the Sierra Blanca Massif, the Sangre de Cristo Range, and the Sangre de Cristo Mountains. The fourteener is located 9.6 miles (15.5 km) north by east (bearing 9°) of the Town of Blanca, on the drainage divide separating Rio Grande National Forest and Alamosa County from the Sangre de Cristo Land Grant and Costilla County. The summit is the highest point of both counties and the entire drainage basin of the Rio Grande. Below the steep North Face of Blanca Peak two live Glaciers once developed, until extinction sometime after 1903. North & South Blanca Glaciers were located at 37° 35N.,longitude 105° 28W. Blanca Peak is higher than any point in the United States east of its longitude.

Blanca Peak is located at the southern end of the Sangre de Cristo Range, a subrange of the more extensive Sangre de Cristo Mountains, and is the highest peak in both ranges. It lies approximately 20 miles (32 km) east-northeast of the town of Alamosa. Approximately 15 miles (24 km) to the north-northwest is Great Sand Dunes National Park and Preserve.

Blanca Peak is notable not only for its absolute height, but also for its great local relief and dominant position at the end of the range, rising high above the San Luis Valley to the west. For example, it rises nearly 7,000 feet (2,100 m) over the edge of the San Luis Valley in only 6 miles (9.7 km). Blanca is also the third most topographically prominent peak in Colorado; it is separated from the higher peaks in the Sawatch Range by relatively low Poncha Pass at 9,019 feet (2,749 m).

Blanca Peak heads up three major creeks. Holbrook Creek is on the west, flowing from a basin including Crater Lake, Blue Lakes, and Como Lake. An extremely challenging four wheel drive road accesses Como Lake 11,750 feet (3,580 m), and provides the most common access to Blanca Peak. Most vehicles stop at an elevation of between 8,000 feet (2,400 m) and 10,000 feet (3,000 m) on this road. The Como Lake Road is a designated Alamosa County Road and runs to the edge of the Sangre de Cristo Wilderness just short of Blue Lakes. The Como Lake Road is rated as the most challenging 4WD road in Colorado. The Huerfano River flows from the north side of Blanca Peak. A road, starting out as a two-wheel drive road, then becoming a four-wheel drive road (less challenging than the Como Lake Road), provides access to the technical climbing on the North Face of Blanca Peak. Blanca Creek drains Blanca Basin under the south slopes of the peak, and Little Ute Creek descends from the Winchell Lakes on the southeast side. However these are not used to access the peak due to private property.

Three other fourteeners are nearby: Mount Lindsey to the east, Ellingwood Point to the north and Little Bear Peak to the southwest. Ellingwood Point is connected to Blanca by a short, high ridge, and is often climbed in conjunction with Blanca. Little Bear also has a high connecting ridge to Blanca, but it is a technical traverse, only recommended for highly experienced parties. 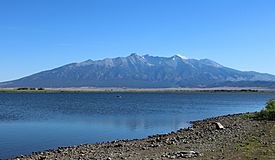 The peak viewed from Smith Reservoir, south of Blanca

Blanca Peak is known to the Navajo people as the Sacred Mountain of the East: Sisnaajiní (or Tsisnaasjiní), the Dawn or White Shell Mountain. The mountain is considered to be the eastern boundary of the Dinetah, the traditional Navajo homeland. It is associated with the color white, and is said to be covered in daylight and dawn and fastened to the ground with lightning. It is gendered male.

Summitpost notes that "the first recorded ascent of Blanca by the Wheeler Survey was recorded on August 14, 1874, but to their surprise they found evidence of a stone structure possibly built by Ute Indians or wandering Spaniards."

All content from Kiddle encyclopedia articles (including the article images and facts) can be freely used under Attribution-ShareAlike license, unless stated otherwise. Cite this article:
Blanca Peak Facts for Kids. Kiddle Encyclopedia.