The Wet Mountains are a small mountain range in southern Colorado, named for the amount of snow they receive in the winter. They are a sub-range of the Sangre de Cristo Mountains, in the southern Rocky Mountains System. There are three variant names of mountain range: Cuerno Verde, Greenhorn Mountains, and Sierra Mojada.

Most of the Wet Mountains range is within Custer County. Greenhorn Peak and part of the range are in Huerfano County and Pueblo County. The range runs approximately from U.S. Highway 50 to Walsenburg.

The tallest point is known as Greenhorn Mountain, which has multiple peaks, the highest of which reaches 12,346 feet (3,763 m). Greenhorn Peak, St. Charles Peak, and North Peak all reach above tree line. The range provides the eastern boundary of the Wet Mountain Valley, bordered on the west by the Sangre de Cristos.

The adjacent Wet Mountain Valley contains the small towns of Westcliffe and Silver Cliff. Within the mountains, Highway 96 weaves its way down to Wetmore by way of Hardscrabble Canyon and is one of only three main exits from the valley. The only other highway in the range is Highway 165, which travels through the range to Rye and Colorado City, and can also be noted for Lake Isabel and Bishop's Castle.

Other towns/communities in the small range include Beulah and Rosita, which is now a ghost town after a period of gold and silver mining over the past two centuries.

The summit of SH 96 in Hardscrabble Canyon has no official name, but is known locally as Hardscrabble Pass, elevation 9085 ft (2769 m). Its broad saddle is just east of Silver Cliff. The summit of SH 165 is Bigelow Divide, elevation 9403 ft (2866 m), near Ophir Creek Campground. The intersection of the two highways, between Silver Cliff and Wetmore, is McKenzie Junction, elevation 8359 ft. The gravel road that connects SH 78 from Beulah to SH 165 is known locally as Bathtub Pass, for a discarded roadside clawfoot bathtub. 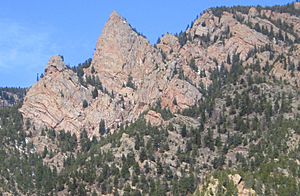 The Wet Mountains are the east flank of an uplifted faulted anticline. The core of the range consists of Precambrian granitic rocks with Paleozoic and Mesozoic strata in fault contact around the southern end and in the northwest. The range lies on the southeast end of the Central Colorado volcanic field and contains Eocene to Oligocene (38–29 Ma) volcanic rocks and carbonatites.

All content from Kiddle encyclopedia articles (including the article images and facts) can be freely used under Attribution-ShareAlike license, unless stated otherwise. Cite this article:
Wet Mountains Facts for Kids. Kiddle Encyclopedia.