Silver Cliff is a statutory town that is the most populous town in Custer County, Colorado, United States. The population was 587 at the 2010 census, up from 512 in 2000. 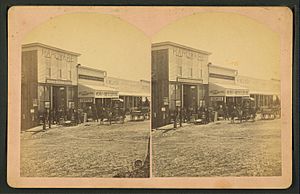 Silver Cliff was formed in the late 1870s to house the miners of its namesake, the Silver Cliff mine, and other silver mines in the neighborhood, such as the Bull-Domingo. The town, incorporated in 1879, had 5,040 residents by the 1880 census, making it the third most populous town in Colorado, after Denver and Leadville.

Silver Cliff was the county seat from 1886 (when the town won the seat from Rosita) to 1928 (when the seat moved to nearby Westcliffe).

The Silver Cliff mine, also known as the Geyser mine, is on the hill immediately north of the town. Although a large operation that employed many residents of Silver Cliff, the mine was the unfortunate object of eastern stock manipulators. Shares in the Silver Cliff mine were promoted in 1879 by James R. Keene, a famous New York stock operator. The company went bankrupt within a few years, and was sold to the Julianna Mining Company, which was run by an even more unscrupulous stock promoter, Dr. Richard C. Flower of Boston. The Julianna company went bankrupt in 1888. The shareholders rescued the company and renamed it the Geyser Mining Company. Although Flower withdrew from the management, the Geyser Mining Company continued to be run by some of Flower's cronies, so it should not be a surprise that the mine never made a profit. At one time the Geyser mine was the deepest mine in Colorado.

According to the United States Census Bureau, Silver Cliff has a total area of 15.5 square miles (40.1 km2), all of it land.

Silver Cliff and neighboring Westcliffe, Colorado are recognized as IDA International Dark Sky Communities by The International Dark-Sky Association. Gentle persuasion has resulted in residents and business in the towns and surrounding ranch land reducing the amount of light pollution.

There were 217 households out of which 33.2% had children under the age of 18 living with them, 48.8% were married couples living together, 12.0% had a female householder with no husband present, and 35.0% were non-families. 31.3% of all households were made up of individuals and 10.1% had someone living alone who was 65 years of age or older. The average household size was 2.36 and the average family size was 2.94.

All content from Kiddle encyclopedia articles (including the article images and facts) can be freely used under Attribution-ShareAlike license, unless stated otherwise. Cite this article:
Silver Cliff, Colorado Facts for Kids. Kiddle Encyclopedia.