The Rio Grande Valley (RGV), The Valley, is an area located in the southernmost tip of South Texas. It lies along the northern bank of the Rio Grande river, which separates Mexico from the United States. The four-county region, consisting of Hidalgo, Cameron, Willacy, and Starr counties, is one of the fastest growing places in the United States. From having about 325,000 people in 1969, to today a population over 1,300,000 in 2014. Some of the biggest cities in the region are; Brownsville, McAllen, Mission, Edinburg, Pharr, Weslaco, Harlingen, Rio Grande City, and Hidalgo.

The Valley is a popular waypoint for tourists visiting Northeast Mexico. Popular destinations across the border and Rio Grande include: Matamoros, Nuevo Progreso, Río Bravo, and Reynosa, all located in the Mexican state of Tamaulipas. 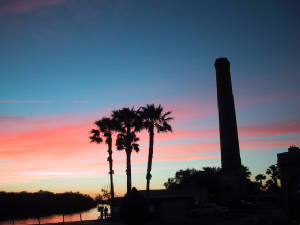 The First Lift Station in Mission, Texas once provided water for irrigating the crops of the early Rio Grande Valley.

All content from Kiddle encyclopedia articles (including the article images and facts) can be freely used under Attribution-ShareAlike license, unless stated otherwise. Cite this article:
Rio Grande Valley Facts for Kids. Kiddle Encyclopedia.