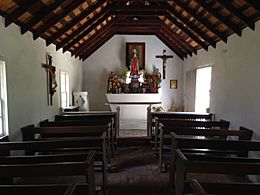 La Lomita Chapel is a historic Catholic chapel in Mission, Texas. It was once an important site for the Cavalry of Christ, a group of priests who traveled long distances on horseback to minister to Catholics living on isolated ranches along the Rio Grande. In 2018 it became the subject of a dispute between the United States government and the Catholic Church due to its location in the path of President Donald Trump's proposed border wall between the U.S. and Mexico.

The site was first named La Lomita ("the hillock") by a rancher, José Antonio Cantu, who was granted the land by Spain in 1770. In 1851, a French merchant named René Guyard purchased the land. A devout Catholic, Guyard built the chapel in 1865, and in 1871 bequeathed it to the Missionary Oblates of Mary Immaculate. Located between the Brownsville and Roma missions, La Lomita became an important stop for the Cavalry of Christ; it served some 65 area ranches, and traveling missionaries often stopped there to rest.

The area developed into a village as the Oblate Fathers constructed a rectory, a guest house, a blacksmith shop, a buggy shed, and quarters for the lay brothers and laborers in what is now La Lomita Historic District. Following a flood in 1899, the chapel was rebuilt with stones from the surrounding hillside. When the city of Mission, Texas, was founded in 1908, it was named in honor of La Lomita. The chapel was designated a Recorded Texas Historic Landmark in 1964, and was added to the National Register of Historic Places in 1975. In 2010, a team of consultants was hired to restore the building; the project won a TSA Design Award and was featured in Texas Architect magazine.

Professor Terry G. Jordan-Bychkov has suggested that La Lomita chapel, along with several other small, parapet-gabled buildings in the region, were designed by the noted French-American priest and architect Pierre Yves Kéralum: "Father Keralum had the expertise, background, and mobility to achieve a substantial implantation of the Atlantic European roof type. Moreover, some related features such as gable-end shed rooms and table or bed outshots are also known in Breton folk architecture." Today, according to a local guidebook, La Lomita stands "—small and humble, cared for and preserved—marking the important role it played in the history of the area."

In October 2018, the United States Border Patrol filed a federal lawsuit to seize the land surrounding the chapel and begin surveying for a border fence. The pastor, Roy Snipes, and his bishop, Daniel E. Flores, oppose the project, and the Brownsville diocese has tried to put a stop to it in court. In December 2018, the Georgetown University Law Center's Institute for Constitutional Advocacy and Protection (ICAP) filed a brief in support of the diocese. The construction as planned would cut off access to the church, which would be on the Mexican side of the fence. Moreover, according to Flores, the entire border wall project is "contrary to Catholic principles of the universality of human relations."

At a hearing in McAllen, Texas, on February 6, 2019, U.S. District Judge Randy Crane said that the diocese must allow surveyors onto the grounds. The diocese is hoping that once the survey is completed, the government will reconsider its plan to seize the land. If not, the diocese plans to assert its rights under the Religious Freedom Restoration Act, a federal law that prohibits the government from placing a "substantial burden" on the practice of religion. According to Mary McCord, a Georgetown University ICAP attorney representing the diocese, "a physical barrier that cuts off access to the chapel, and not only to Father Roy and his parish but those who seek to worship there, is clearly a substantial burden on the exercise of religious freedom."

In February 2019, Congress amended an existing appropriations bill, adding language that specifically prohibits new funding from being used to build border barriers at La Lomita and several other properties, including the Santa Ana National Wildlife Refuge, the Bentsen-Rio Grande Valley State Park, the National Butterfly Center, and the area "within or east of" the Vista del Mar Ranch tract of the Lower Rio Grande Valley National Wildlife Refuge. Soon afterwards, President Trump declared a National Emergency Concerning the Southern Border of the United States, and the White House Counsel claimed that the restrictions contained within the annual appropriations law did not apply. As a result, the status of La Lomita and the other protected sites is still in question. On May 24, 2019, a federal judge temporarily blocked the Trump administration's plan to divert funds not explicitly appropriated by Congress. However, on June 3, another federal judge denied a request by the House of Representatives to temporarily block spending on the wall.

Locals have held several demonstrations in support of La Lomita. On Palm Sunday, April 14, 2019, over a thousand parishioners held a procession from Our Lady of Guadalupe Church to the chapel. After the procession, Pastor Roy Snipes was nominated for an award by Catholic Extension, a national fundraising organization that supports poor mission dioceses across the country. As a result of his opposition to the wall, he has become the target of a right-wing smear campaign.

All content from Kiddle encyclopedia articles (including the article images and facts) can be freely used under Attribution-ShareAlike license, unless stated otherwise. Cite this article:
La Lomita Chapel Facts for Kids. Kiddle Encyclopedia.