The wildlife refuge was established for the protection of migratory birds in 1943. Its unique location is at the meeting of different climates and habitats: subtropical wetlands, Chihuahuan Desert, Gulf Coast, and Great Plains. Its riparian location has developed a reputation for diverse birding.

Due to its location near the Mexico–United States border, this wildlife refuge is threatened by the Trump wall. 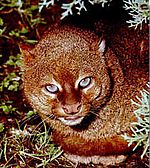 Gulf Coast jaguarundi are among the animals found in the refuge

While not considered endangered by the International Union for Conservation of Nature (IUCN), these species are acknowledged as rare for the area. 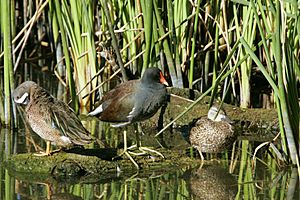 Common gallinule (middle) and blue-winged teals in the refuge

397 bird species have been documented within the park's borders. Many of those are migratory species on their way to and from Central and South America. 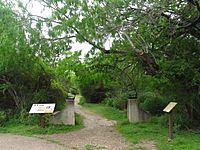 Osprey, broad-winged hawk, northern harrier, and peregrine falcon are among the migratory birds of prey found in the refuge. Hook-billed kite and gray hawk, seen occasionally in the refuge, attract birders from around the world. 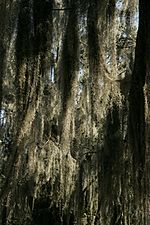 Spanish moss growing on trees in the refuge

Santa Ana is home to almost half of all butterfly species found in the United States. More than 300 species of butterflies have been observed at the refuge, with as many as 65 having been seen on a single day.

All content from Kiddle encyclopedia articles (including the article images and facts) can be freely used under Attribution-ShareAlike license, unless stated otherwise. Cite this article:
Santa Ana National Wildlife Refuge Facts for Kids. Kiddle Encyclopedia.