The blue-winged teal (Spatula discors) is a species of bird in the duck, goose, and swan family Anatidae. One of the smaller members of the dabbling duck group, it occurs in North America, where it breeds from southern Alaska to Nova Scotia, and south to northern Texas. It winters along the Pacific and Atlantic coasts and south into the Caribbean islands and Central America.

The first formal description of the blue-winged teal was by the Swedish naturalist Carl Linnaeus in 1766 in the twelfth edition of his Systema Naturae. He coined the binomial name Anas discors. A molecular phylogentic study comparing mitochondrial DNA sequences published in 2009 found that the genus Anas, as then defined, was non-monophyletic. The genus was subsequently split into four monophyletic genera with ten species including the blue-winged teal moved into the resurrected genus Spatula. This genus had been originally proposed by the German zoologist Friedrich Boie in 1822. The name Spatula is the Latin for a "spoon" or "spatula". The specific epithet discors is the Latin for "different" or "at variance". 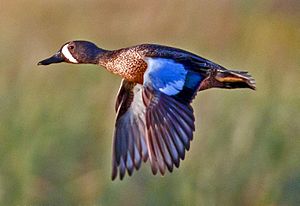 The blue-winged teal is 40 cm (16 in) long, with a wingspan of 58 cm (23 in), and a weight of 370 g (13 oz). The adult male has a greyish blue head with a white facial crescent, a light brown body with a white patch near the rear and a black tail. The adult female is mottled brown, and has a whitish area at base of bill. Both sexes have sky-blue wing coverts, a green speculum, and yellow legs. They have two molts per year and a third molt in their first year. The call of the male is a short whistle; the female's call is a soft quack.

The range is all of North America except western and northern Alaska, northern Yukon Territory, northern Northwest Territories and the northeastern area of Canada. Blue-winged teal are rare in the desert southwest, and the west coast. The breeding habitat of the blue-winged teal is marshes and ponds.

The breeding range extends from east-central Alaska and southern Mackenzie District east to southern Quebec and southwestern Newfoundland. In the contiguous United States it breeds from northeast California east to central Louisiana, central Tennessee, and the Atlantic Coast. The western blue-winged teal inhabits that part of the breeding range west of the Appalachian Mountains. The Atlantic blue-winged teal nests along the Atlantic Coast from New Brunswick to Pea Island, North Carolina.

They migrate in flocks to winter in to the south of its breeding range. During migration, some birds may fly long distances over open ocean. They are occasional vagrants to Europe, where their yellow legs are a distinction from other small ducks like the common teal and garganey, and in recent years have been annual vagrants in Britain and Ireland. The blue-winged teal winters from southern California to western and southern Texas, the Gulf Coast to the Atlantic Coast, the Caribbean, and south to Central and South America. It is often seen wintering as far south as Brazil and central Chile.

Blue-winged teal winter on shallow inland freshwater marshes and brackish and saltwater marshes. They build their nests on dry ground in grassy sites such as bluegrass meadows, hayfields, and sedge meadows. They will also nest in areas with very short, sparse vegetation. Blue-winged teal generally nest within several hundred yards of open water; however, nests have been found as far as 1.61 km (1 mi) away from water. Where the habitat is good, they nest communally.

Blue-winged teal often use heavy growth of bulrushes and cattails as escape cover. Grasses, sedges, and hayfields provide nesting cover for these ducks. Erik Fritzell reported that blue-winged teal nests located in light to sparse cover were more successful than those in heavy cover. Nesting success was 47% on grazed areas and 14% on ungrazed areas. 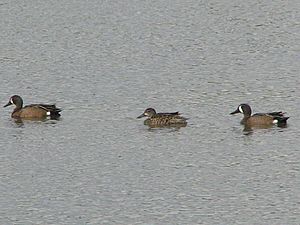 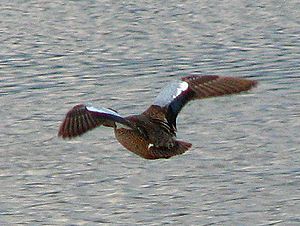 These birds feed by dabbling in shallow water at the edge of marshes or open water. They mainly eat plants; their diet may include molluscs and aquatic insects. 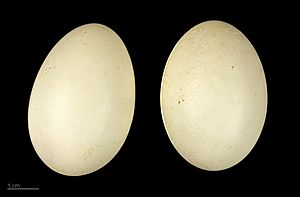 The onset of courtship among immature blue-winged teal often starts in late January or early February. In areas south of the breeding grounds, blue-winged teal are more active in courtship during the spring migration than are most other ducks.

Blue-winged teal are among the last dabbling ducks to nest, generally nesting between April 15 and May 15. Few nests are started after mid-July. Chronology of nesting can vary from year to year as a result of weather conditions. At Delta Marshes, Manitoba, blue-winged teal nesting was delayed a week in 1950 due to abnormally cold weather. The nest is a shallow depression on the ground lined with grass and down, usually surrounded by vegetation.

Blue-winged teal generally lay 10 to 12 eggs. Delayed nesting and renesting efforts have substantially smaller clutches, averaging five to six eggs. Clutch size can also vary with the age of the hen. Yearlings tend to lay smaller clutches. Incubation takes 21 to 27 days. Blue-winged teal are sexually mature after their first winter. During incubation, the drake leaves its mate and moves to suitable molting cover where it becomes flightless for a period of 3 to 4 weeks.

Blue-winged teal ducklings can walk to water within 12 hours after hatching but do not fledge until 6 to 7 weeks. 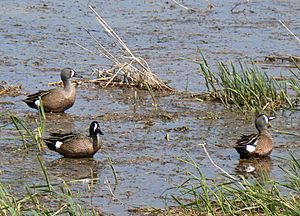 Blue-winged teal are surface feeders and prefer to feed on mud flats, in fields, or in shallow water where there is floating and shallowly submerged vegetation plus abundant small aquatic animal life. They mostly eat vegetative matter consisting of seeds or stems and leaves of sedge, grass, pondweed, smartweed (Polygonum spp.), duckweed (Lemna spp.), Widgeongrass, and muskgrass (Chara spp.). The seeds of plants that grow on mud flats, such as nutgrass (Cyperus spp.), smartweed, millet (Panicum spp.), and Rice Cut-grass (Leersia oryzoides), are avidly consumed by this duck. One-fourth of the food consumed by blue-winged teal is animal matter such as mollusks, crustaceans, and insects.

During one study, about half of the nest failures of blue-winged teal were caused by mammals. Striped and Spotted Skunks were responsible for two-thirds of these losses. All nest losses caused by birds were attributed to either crows or magpies.

All content from Kiddle encyclopedia articles (including the article images and facts) can be freely used under Attribution-ShareAlike license, unless stated otherwise. Cite this article:
Blue-winged teal Facts for Kids. Kiddle Encyclopedia.