The Sacramento NWR Complex was created in an attempt to resolve the conflict between the needs of migrating birds using the Pacific Flyway, and those of agriculture.

The Sacramento NWR Complex headquarters and visitor center is located in the 10,819-acre Sacramento National Wildlife Refuge off of 99W, and features a wildlife exhibit, bookstore, and Discovery Room. Visitors can enjoy a six-mile auto tour with 3 viewing areas and two walking trails.

Before the arrival of European settlers in the 19th century, much of the Sacramento valley was taken up by seasonal wetlands and grasslands. By the beginning of the 20th century, much of this had been replaced by farmland, particularly for the growing of rice, and the rivers no longer create new wetlands because their flow is controlled by levees and irrigation schemes. Less than 10% of the original wetland area remains. Migrating birds have continued to use the area, and resting in the rice fields, consumed considerable quantities of the crop. 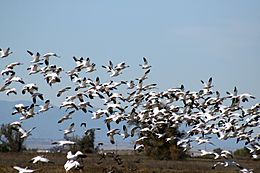 In 1937, the United States Fish and Wildlife Service, with the aid of the Civilian Conservation Corps, began the process of creating a refuge within dry, alkaline lands between the towns of Willows and Maxwell. This was the original Sacramento NWR. From the 1940s onward, additional refuges were created, so that the Sacramento NWR Complex now includes the following refuges, located between 80 and 145 kilometres (50 and 90 mi) north of the city of Sacramento: 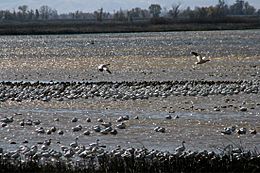 The water flows in the refuge have to be controlled artificially, and the vegetation has to be managed actively through irrigation and burning, to ensure that the wetlands remain productive, and provide adequate food and resting places for the birds. Between them, the refuges provide a range of habitats: seasonal marshes, uplands, permanent ponds, and riparian areas.

The refuges are provided with facilities for visitors, though these have to be limited to avoid conflict with their primary purpose of conservation. The layout of the wetlands has been planned to allow visitors a good view of the birds while minimising the risk of disturbance to them. There is a visitor center at the Sacramento NWR, and routes for car tours on the Sacramento and Colusa sites, though visitors are allowed to leave their cars only at selected sites. There are walking trails at both those sites and also at the Sacramento River site. Limited hunting is permitted on some of the sites.

Over 300 species of birds and mammals use the refuges, not all of them migratory. Among those most likely to be seen by visitors (depending on season) are:

The Sacramento National Wildlife Refuge Complex boasts a diverse flora, even though large amounts of the historic wetland has been destroyed. Among the diverse wildflowers present is the yellow mariposa lily, Calochortus luteus.

All content from Kiddle encyclopedia articles (including the article images and facts) can be freely used under Attribution-ShareAlike license, unless stated otherwise. Cite this article:
Sacramento National Wildlife Refuge Complex Facts for Kids. Kiddle Encyclopedia.