The cinnamon teal (Spatula cyanoptera) is a species of duck found in western North and South America. It is a small dabbling duck, with bright reddish plumage on the male and duller brown plumage on the female. It lives in marshes and ponds, and feeds mostly on plants. 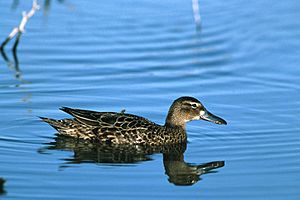 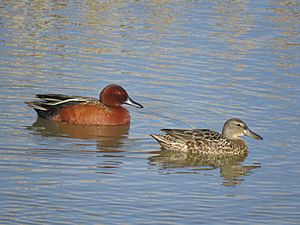 The adult male has a cinnamon-red head and body with a brown back, a red eye and a dark bill. The adult female has a mottled brown body, a pale brown head, brown eyes and a grey bill and is very similar in appearance to a female blue-winged teal; however its overall color is richer, the lores, eye line, and eye ring are less distinct. Its bill is longer and more spatulate. Male juvenile resembles a female cinnamon or blue-winged teal but their eyes are red. They are 16 in (41 cm) long, have a 22-inch (560 mm) wingspan, and weigh 14 oz (400 g). They have 2 adult molts per year and a third molt in their first year.

Their breeding habitat is marshes and ponds in western United States and extreme southwestern Canada, and are rare visitors to the east coast of the United States. Cinnamon teal generally select new mates each year. They are migratory and most winter in northern South America and the Caribbean, generally not migrating as far as the blue-winged teal. Some winter in California and southwestern Arizona. Two subspecies of cinnamon teal reside within the Andes of South America. The smaller sized S. c. cyanoptera is widespread within low elevations (<1000m) such as the coast of Peru and southern Argentina, whereas the larger size subspecies S. c. orinomus occupies elevations of 3500-4600 meters in the central Andes. 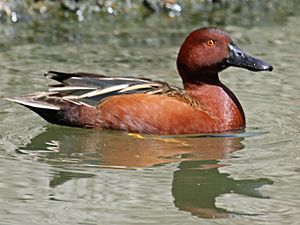 These birds feed by dabbling. They mainly eat plants; their diet may include molluscs and aquatic insects.

They are known to interbreed with blue-winged teals, which are very close relatives.

All content from Kiddle encyclopedia articles (including the article images and facts) can be freely used under Attribution-ShareAlike license, unless stated otherwise. Cite this article:
Cinnamon teal Facts for Kids. Kiddle Encyclopedia.