The ruby-crowned kinglet (Regulus calendula) is a very small passerine bird found throughout North America. It is a member of the kinglet family. The bird has olive-green plumage with two white wing bars and a white eye-ring. Males have a red crown patch, which is usually concealed. The sexes are identical (apart from the crown), and juveniles are similar in plumage to adults. It is one of the smallest songbirds in North America. The ruby-crowned kinglet is not closely related to other kinglets, and is put in its own subgenus, Corthylio. Three subspecies are currently recognized.

The kinglet is migratory, and its range extends from northwest Canada and Alaska south to Mexico. Its breeding habitat is spruce-fir forests in the northern and mountainous regions of the United States and Canada. The ruby-crowned kinglet builds a cup-shaped nest, which may be pensile or placed on a tree branch and is often hidden. It lays up to 12 eggs, and has the largest clutch of any North American passerine for its size. It is mainly insectivorous, but also eats fruits and seeds.

The ruby-crowned kinglet is a very small bird, being 9 to 11 cm (3.5 to 4.3 in) long, having a wingspan of 16 to 18 cm (6.3 to 7.1 in), and weighing 5 to 10 g (0.2 to 0.4 oz). It has gray-green upperparts and olive-buff underparts. It has two white wingbars and a broken white eye ring. The wingbar on the greater secondary coverts (closer to the wing-tip) is wider, and is next to a dark band. The kinglet has a relatively plain face and head, although the male has a scarlet-red crown patch, which is usually concealed by the surrounding feathers. The crown patch is rarely orange, yellow, or not present. Females are identical to males (except for the crown). Immature birds are similar to adult females, since young males lack a crown patch. The kinglet usually moves along branches or through foliage with short hops, and flies with bursts of rapid wing beats. It is constantly active, and is easily recognized by its characteristic wing-flicking. Its flight has been described as "swift, jerky, and erratic".

Compared to the related golden-crowned kinglet, the ruby-crowned kinglet is slightly larger, more elongated, and has greener plumage. The bird can be mistaken for the Hutton's vireo, which also displays wing-flicking, though less frequently than the kinglet. It can also be mistaken for the dwarf vireo in Mexico. However, both of the vireos are larger, have stouter bills and legs, and lack the kinglet's black bar on the wings.

The ruby-crowned kinglet's vocalizations are remarkably loud and complex for its size. Its song can be divided into three main parts: a series of high pitched notes (zee-zee-zee or tee-tee-tee), two to five low trills (turr or tu), and a repeated three note "galloping" phrase (tee-da-leet, tee-da-leet). However, there is variation in the songs of a given individual, and they often contain only one or two of the three parts. The third part is only sung by male birds; an abbreviated version is heard from the females. Other vocalizations of the ruby-crowned kinglet include alarm calls, simple contact calls, and begging calls produced by chicks.

The kinglets are a small group of birds sometimes included in the Old World warblers, but frequently given family status, especially as recent research showed that, despite superficial similarities, the crests are taxonomically remote from the warblers. The names of the family, Regulidae, and its only genus, Regulus, are derived from the Latin regulus, a diminutive of rex, "a king", and refer to the characteristic orange or yellow crests of adult kinglets. The ruby-crowned kinglet was first described in 1766, in the 12th edition of Carl Linnaeus's Systema Naturae. Its species name means "by the month", and is shared with a genus of flower.

As a result of its larger size, strongly red (rather than orange or yellow) crest and lack of black crown stripes, as well as its distinctive vocalisations, the ruby-crowned kinglet is sometimes considered different enough from the Old World kinglets and the other American species, the golden-crowned kinglet, to be sometimes assigned to a separate genus, Corthylio.

Up to five subspecies have been recognized, but "cineraceus", breeding in montane western North America, and "arizonensis", breeding in Arizona, are considered to be clinal variants of the nominate subspecies. 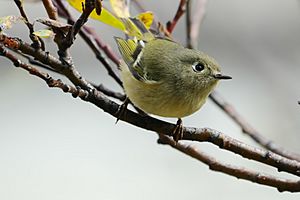 The subspecium Regulus calendula grinnellii in September at Lake Louise in Alberta.

The form grinnellii, breeding from southeast Alaska to British Columbia differs significantly from nominate calendula, and so is considered to be represent a valid subspecies: it is smaller and shorter-winged, its upperparts are darker and greener, its underparts are buffy rather than grayish olive, and the vent is tinged yellow rather than dull whitish olive.

The subspecies obscurus, from Guadalupe Island, off Baja California, is considered endangered, and may already be extinct.

Hybridization with golden-crowned kinglet has been reported to have possibly occurred.

Their breeding habitat is coniferous forests across Canada, Alaska, northern New England and the western United States. They nest in a well-concealed hanging cup suspended from a conifer branch and may lay as many as twelve eggs in a clutch.

The recent counting indicates that the ruby-crowned kinglet population is on the rise. This is mainly due to discovery of less disturbed territory farther north. This allows more successful breeding.

These birds migrate to the southern United States and Mexico. Some birds are permanent residents in the west.

Ruby-crowned kinglets forage actively in trees or shrubs, mainly eating small insects and spiders, some berries and tree sap. They may hover over a branch while feeding and sometimes fly out to catch insects in flight. The red crest is raised when agitated or in display. Often, they perform a "broken-wing" act to draw predators away from their nest, which they will defend fearlessly, mobbing the intruder which may be a cat, squirrel, or human.

All content from Kiddle encyclopedia articles (including the article images and facts) can be freely used under Attribution-ShareAlike license, unless stated otherwise. Cite this article:
Ruby-crowned kinglet Facts for Kids. Kiddle Encyclopedia.