The palm warbler (Setophaga palmarum) is a small songbird of the New World warbler family. 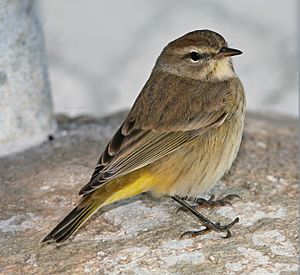 "Yellow palm warbler" or "eastern palm warbler" (S. p. hypochrysea) of the eastern third of the breeding range has brownish-olive upper parts and thoroughly yellow underparts with bold rufous breast and flank streaking. It migrates later in the fall than its western counterpart. 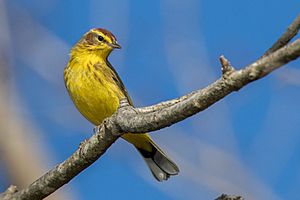 A Palm Warbler photographed during its Spring migration

Palm warblers breed in open coniferous bogs and edge east of the Continental Divide, across Canada and the northeastern United States.

These birds migrate to the southeastern United States, the Yucatán Peninsula, islands of the Caribbean, and eastern Nicaragua south to Panama to winter. They are one of the earlier migrants to return to their breeding grounds in the spring, often completing their migration almost two months before most other warblers. Unlike most Setophaga species, the Palm warbler's winter range includes much of the Atlantic coast of North America, extending as far north as southern Nova Scotia. Every year since 1900 the Palm warbler has been observed during Christmas Bird Count activities in Massachusetts, and consistently since 1958 in Nova Scotia. For the interval 1966-2015 the Palm warbler population increased throughout much of its northernmost breeding range.

Palm warbler has been recorded as a vagrant to Iceland.

Palm warbler nests take the form of an open cup, usually situated on or near the ground in an open area.

Palm warblers forage on the ground much more than other warblers, sometimes flying to catch insects. These birds mainly eat insects and berries. Their constant tail bobbing is an identifying characteristic. Kirtland's, prairie, and palm warblers are the only Setophaga species that incessantly bob their tails.

The song of this bird is a monotonous buzzy trill. The call is a sharp chek.

All content from Kiddle encyclopedia articles (including the article images and facts) can be freely used under Attribution-ShareAlike license, unless stated otherwise. Cite this article:
Palm warbler Facts for Kids. Kiddle Encyclopedia.