The northern parula (Setophaga americana) is a small New World warbler. It breeds in eastern North America from southern Canada to Florida.

Its song is a click-like trill or buzz, zeeeeee-yip and the call is a soft chip.

"Parula" ultimately derives from Latin parrula, coal tit. The genus name Setophaga is from Ancient Greek ses, "moth", and phagos, "eating", and the specific americana is Latin for "American". 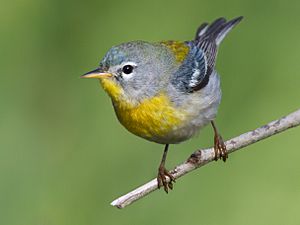 At Galveston, Texas during spring migration 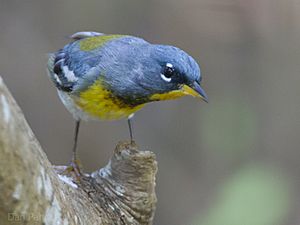 This species is migratory, wintering in southern Florida, northern Central America, the West Indies and most of the Lesser Antilles. This species is a very rare vagrant to western Europe.

While the species is still common as a breeder across most of eastern North America, there are conspicuous gaps in their breeding range that were likely once breeding grounds. They have been extirpated as a breeder from much of the Midwest as well as from many areas in Massachusetts, New Jersey, Connecticut, New York, Rhode Island and Vermont. Explanations for the disappearance may be changes in habitat or increasing air pollution, which limited the growth of epiphytes on trees that the warbler depended on for nesting. A further explanation is the clear-cutting and bog draining that have significantly reduced the amount of suitable habitat in eastern North America.

The northern parula inhabits various habitats depending on season and location. This is primarily a forest-dwelling species, but the northern and southern breeding populations select different habitats. In general, abundance of this species has been found to be positively correlated with increased tree species diversity, canopy height, and percent canopy cover. Northern populations breed in mature, moist coniferous forests. This species constructs its pendulum nests in hanging vegetation and so it is often attracted to suspended clumps of moss or coniferous twigs that are more abundant in moist spruce bogs or hemlock swamps. Southern populations breed in mature, moist, bottomland forest where Spanish moss is prevalent. Outside of the breeding season, the northern parula becomes more of a habitat generalist and may be found in a wide variety of habitats during migration and winter. These habitats may include: pastures; moist, dry or wet forests; and agricultural fields or plantations.

This is a monogamous species, however, a few cases of polygamy have been reported. Southern populations can start breeding as soon as March but to the north of the range, the species does not nest until May. The breeding habitat is humid woodland with growths of Old Man's Beard lichen or Spanish moss. Northern parulas nest in trees in clumps of these fungi (Old Man's Beard; Usnea) or plants (Spanish moss; Tillandsia usneoides), laying 3–7 eggs in a scantily lined cup nest. Sites located near water sources are preferred and many nests are found at the end of branches suspended over water. Due to their longer breeding season, southern parulas frequently raise two broods, as opposed to northern ones who raise only one. The female hollows out a clump of vegetation in the moss and proceeds to fill the cavity with vegetation fibers, animal hair, grass, or pine needles. These nests average 7 cm (2.8 in) in outside diameter. The incubation period typically lasts 12 to 14 days and the young fledge at 10 to 11 days. Breeding maturity is attained the following year.

The northern parula forages mostly or entirely on terrestrial invertebrates. Prey items include spiders, damselflies, locusts, bugs, grasshoppers, aphids, beetles, caterpillars, flies, wasps, bees, and ants. Regardless of season, caterpillars and spiders are consumed most often. During the winter, the northern parula consumes more beetles and occasionally forages on berries, seeds, and nectar. This species primarily captures prey from vegetation by a hover-glean method, however this species is versatile in using a variety of foraging methods. It may make short flights from a perch to snatch prey in mid-flight or even hang upside-down to forage. It is most often seen foraging in the mid- to upper canopy levels of vegetation. Though most foraging activity occurs in arboreal vegetation, this species occasionally forages on or around the ground as well.

A northern parula from Augusta, Georgia was found to be a host of an intestinal acanthocephalan worm, Apororhynchus amphistomi.

All content from Kiddle encyclopedia articles (including the article images and facts) can be freely used under Attribution-ShareAlike license, unless stated otherwise. Cite this article:
Northern parula Facts for Kids. Kiddle Encyclopedia.