Weslaco is a city in Hidalgo County, Texas, United States. As of the 2010 census the population was 35,670, and in 2019 the estimated population was 41,629. It is located at the southern tip of Texas in the Rio Grande Valley near the Mexican border, across the Rio Grande from the city of Nuevo Progreso, Rio Bravo, Tamaulipas.

Weslaco derives its name from the W.E. Stewart Land Company. It was the hometown of Harlon Block, one of the Marines photographed raising the flag at Iwo Jima, and of film and television actor David Spielberg.

Streets north of the railroad tracks have Spanish names, and streets south of the railroad tracks bear names in English, as a consequence of a 1921 municipal ordinance which declared that land north of the tracks be reserved for Hispanic residences and businesses, and land south of the tracks be reserved for "Anglo" residences and businesses. During World War II, sandbag production reached a peak in Weslaco, and the town declared itself the "sandbagging capital of the world".

Weslaco is part of the McAllen–Edinburg–Mission and Reynosa–McAllen metropolitan areas.

The present location of Weslaco was originally part of the Llano Grande land grant to Juan José Ynojosa de Ballí in 1790. After Ynojosa's death the grant was allocated to his children. Manuela and María received the land on which Weslaco is located today. The Ballí family ranched and maintained ownership of the land until 1852. In 1904, the Hidalgo and San Miguel extension of the St. Louis, Brownsville and Mexico Railway made its way to the site. It was promoted by Uriah Lott, Lon C. Hill, Jr. and others interested in developing the area through farming as opposed to ranching. The American Rio Grande Land and Irrigation Company of neighboring Mercedes purchased a major portion of the Llano Grande grant and platted the West Tract in 1913. In an effort to control raids from Mexico, the United States government stationed troops along the Rio Grande in 1916. A camp was established at the Llano Grande railroad depot. This camp was located between Mercedes and the current site of Weslaco. A watchtower was constructed at Progreso by these troops.

On December 14, 1917, the irrigation company sold 30,000 acres at ninety dollars an acre to the W. E. Stewart Land Company. The town name Weslaco was derived from this company’s name. The Stewart Company later sold the town site to Ed C. Couch, Dan R. Couch, R. C. Couch, and R. L. Reeves. The site was surveyed and platted on September 18, 1919, by H. E. Bennett, a civil engineer hired by Ed Couch and R. L. Reeves, whose partners, fearing failure, had backed out of the venture. Nearby communities circulated flyers discouraging settlement at the proposed town. Nevertheless, the sale of lots was held on December 8–10, 1919. Prices ranged from $50 to $400 per lot. To make a claim, individuals had to choose a lot and camp on it until the day of the sale. Lots were given away free to church groups. Three cars were also given away as promotion during the sale.

The climate in this area is characterized by hot, humid summers and generally mild to cool winters. According to the Köppen Climate Classification system, Weslaco has a humid subtropical climate, abbreviated "Cfa" on climate maps. The average high in January is 71 °F and the average low is 49 °F. The average high is 97 °F and the average low is 76 °F in August. The warm season is extremely long, as average high temperatures from May through September are above 90 °F (32 °C) and average low temperatures are above 70 °F (21 °C), with relatively high dew point values resulting in higher relative humidity values and heat index values. Heat index values can consistently reach over 100 °F during these months.

Average annual precipitation is only 24.89 inches (632 mm). Most precipitation occurs in the warm season, with the least precipitation distinctly occurring in the cooler winter. As September is the peak of the north Atlantic hurricane season and tropical storms and hurricanes occasionally drop copious amounts of rainfall on the region, this month tends to be by far the wettest, averaging 4.92 inches (125 mm) of rain. The driest month is March, with only 1.06 inches (27 mm) of precipitation. Weslaco has had an average annual snowfall of 0.1 inches over the last 30 years. The record snowfall was 3.00 inches (76 mm) on December 25, 2004.

The Weslaco Museum has exhibits and hosts events for local residents to maintain pride and appreciation of their history and culture. The museum strives to be an educational and informational resource for the City of Weslaco.

Weslaco is home to one of the nine sites of the World Birding Center in the Rio Grande Valley. The site is located within the Estero Llano Grande State Park. Visitors can enjoy bird walks, butterfly walks, dragonfly walks, and the electric tram nature tour. The park is also available for school programs and field trips.

The Valley Nature Center is a six-acre park and environmental education center that focuses on the plants and animals of the Rio Grande Valley.

Weslaco is a popular Winter Texan destination and a gateway between Texas and Mexico. Weslaco offers a great tropical environment with just the right touch of history and culture. In the summer months many travelers come to the area to visit the lower Texas coast and the beaches of South Padre Island. Many Mexican vacationers visit the Texas Valley and stay or maintain homes in Weslaco and surrounding communities. 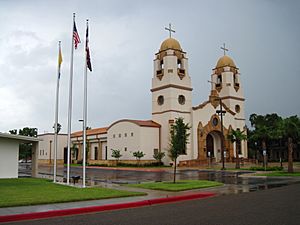 The focal point of economic activity has shifted from agriculture to international trade, healthcare, retail and tourism since the ratification of the North American Free Trade Agreement in 1994.

It is estimated that there are 40 million visits per year from Mexican citizens coming to Texas for vacations and shopping trips. These people contribute greatly to the retail sales volume that occurs in Weslaco and the surrounding communities.

Prime Healthcare Services, through its subsidiary Knapp Medical Center, serves Weslaco's emergency medical needs. The facility is outfitted with a Heli-Pad, Level 3 Trauma Unit and 233 hospital beds. Surrounding Knapp Medical is an unofficial healthcare district featuring a concentration of physicians, medical services and pharmacies. This district draws patients from the entire Mid-Valley. There is a double board certified, fellow trained Orthopedic Surgeon specializing in Total Joint Replacement and fracture care. Dr. Michael D. Sander is a native of Weslaco, Texas. Weslaco residents can check with local providers for other specialized needs.

All content from Kiddle encyclopedia articles (including the article images and facts) can be freely used under Attribution-ShareAlike license, unless stated otherwise. Cite this article:
Weslaco, Texas Facts for Kids. Kiddle Encyclopedia.