Kids Encyclopedia Facts
For other places with the same name, see Harlingen (disambiguation).

Harlingen ( HAR-lin-jin) is a city in Cameron County in the heart of the Rio Grande Valley of southern Texas, United States, about 30 miles (48 km) from the coast of the Gulf of Mexico. The city covers more than 40 square miles (104 km2) and is the second largest city in Cameron County, as well as the fourth largest in the Rio Grande Valley. As of the 2010 census the city had a population of 64,849, for a growth rate of 12.5% since the 2000 census. It is the city with the least expensive cost of living in the United States. 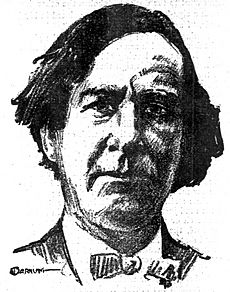 Harlingen's strategic location at the intersection of U.S. Route 77 and U.S. Route 83, designated as Interstate 69 East and Interstate 2 respectively, in northwestern Cameron County fostered its development as a distribution, shipping, and industrial center. In 1904 Lon C. Hill (a man of Choctaw ancestry) envisioned the Arroyo Colorado as a commercial waterway. He named the town he founded on the north bank after the Frisian city of Harlingen, the Netherlands. The town's post office was established that year. The first school opened with fifteen pupils in 1905 near the Hill home, the first residence built in Harlingen. Harlingen incorporated on April 15, 1910, when the population totaled 1,126. In 1920 the census listed 1,748. The local economy at first was almost entirely agricultural. Major crops were vegetables and cotton.

World War II military installations in Harlingen caused a jump in population from 23,000 in 1950 to 41,000 by 1960. Harlingen Army Air Field preceded Harlingen Air Force Base, which closed in 1962. The city's population fell to 33,603 by 1972, then climbed to 40,824 by 1980. Local enterprise, focused on the purchase and utilization of the abandoned base and related housing, laid the groundwork for continuing progress through a diversified economy. The estimated population in July 1985 was 49,000, of which about 80 percent was Hispanic. In the late 1980s income from tourism ranked second only to citrus fruit production, with grain and cotton next in order. The addition of wholesale and retail trade, light and medium manufacturing, and an array of service industries has broadened the economic base. Large-scale construction for multifaceted retirement communities is a new phase of industrial development.

The City of Harlingen operates a busy industrial airpark where bombers used to land. At Valley International Airport the Confederate Air Force (now Commemorative Air Force) occupied hangar and apron space until 1991. The first hospital in Harlingen opened in 1923 and consisted of little more than two barracks as wings. The Valley Baptist Hospital was built nearby a few years later, and eventually the older hospital closed. The Valley Baptist Hospital has grown into the Valley Baptist Medical Center. The city's outstanding network of health care specialists and facilities parallels the growth of the still-expanding center. Also serving regional health needs are the South Texas State Chest Hospital, the State Hospital for Children, and the Rio Grande State Mental Health and Mental Retardation Center.

Besides public and church-affiliated schools, Harlingen students attend the University Preparatory School, the Marine Military Academy, Texas State Technical College, or Rio Grande Vocational and Rehabilitation Classes. Civic and cultural development in Harlingen has kept pace with the growth of the community. Fraternal orders and civic organizations operating in the community include Rotary, Kiwanis, Lions, Optimist, 20-30, VFW, American Legion, and the Lower Valley Cotillion Club; a woman's building is maintained as a center for the activities of the many woman's clubs active in the city. Development and appreciation of the fine arts are encouraged by organizations such as the Rio Grande Valley Art League, the Art Forum, and the Rio Grande Valley Civic Association, which stages its winter concert series at the 2,300-seat Harlingen Municipal Auditorium. Each March Harlingen is the site of the Rio Grande Valley International Music Festival. The city has two newspapers—the Harlingen Press, a weekly paper established in 1951, and the Valley Morning Star, a daily established in 1911. In 1990 the population was 48,735. In 1992 the city was named an All-America City, cited especially for its volunteer spirit and self-help programs. In 2000 the community had 57,564 inhabitants and 2,549 businesses.

The famous Tejana singer Selena also performed here with her band Selena and the Dinos.

Soils in Harlingen range in texture from fine sandy loam to clay. They are neutral to moderately alkaline with pH of 7.2 to 8.5 (most commonly around 8.2), and are moderately well drained or well drained in most cases. There are small areas of poorly drained, saline clays.

As in other cities in the Lower Rio Grande Valley, a significant part of Harlingen's transient population and a significant contributor to its economy consists of "Winter Texans", generally retirees from the northern Midwestern states and Canada who come to escape the northern winter weather between roughly November and March.

Harlingen was the home of the Rio Grande Valley WhiteWings, a United Baseball League Minor league baseball team. The team existed from 1994 to 2003 and from 2006 to 2015. In 2000, the WhiteWings won the Texas-Louisiana League championship.

Valley Race Park is a racetrack for Greyhound dogs. Valley Race Park was the first greyhound track in Texas to accept Pari-Mutuel wagering. The facility is fully air-conditioned and the grandstands totals over 80,000 square feet (7,400 m2). The grandstand has over 400 monitors to pick up the 50 plus Simulcast Live Racing signals from the top Greyhound and Horse tracks from all around the United States. Valley Race Park shut down in the fall of 1995 but reopened five years later, in the spring of 2000.

The World Birding Center has a location in Harlingen's Hugh Ramsey Nature Park. Work continues on designs for a new 7,250-square-foot (674 m2) visitors’ center at Hugh Ramsey Nature Park. The two-story center will include a gift shop, observation tower, meeting rooms and enclosed viewing areas. Meanwhile, visitors at both Ramsey Park and the Thicket will find parking and extensive trails, as well as maps, information and public restrooms.

Culture and points of interest

All content from Kiddle encyclopedia articles (including the article images and facts) can be freely used under Attribution-ShareAlike license, unless stated otherwise. Cite this article:
Harlingen, Texas Facts for Kids. Kiddle Encyclopedia.