Mercedes is a U.S. city in Hidalgo County, Texas. The population was 15,570 at the 2010 census. It is part of the McAllen–Edinburg–Mission and Reynosa–McAllen metropolitan areas. 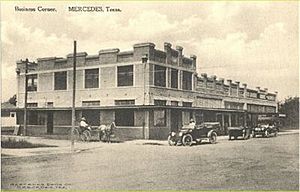 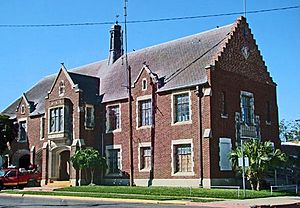 Mercedes is known as "The Queen City of the Valley" or "La Reina del Valle". The city of Mercedes was founded September 15, 1907, by the American Rio Grande Land & Irrigation Company, and was incorporated March 8, 1909. It is one of the oldest towns in the Rio Grande Valley, and the city celebrated its centennial in 2007.

The city was located in Capisallo Pasture, part of Capisallo Ranch owned by Jim Welles. This location was known as the Pear Orchard because of the vast numbers of prickly pear cactus growing there at that time.

General Zachary Taylor's headquarters was to the southeast of Mercedes near the river. There the old Rabb Ranch was famous for its stagecoach stop and riverboat landing for the riverboats that plied the Rio Grande carrying supplies to the settlements and military installations.

The old Toluca Ranch still stands east of the International Bridge at Progreso, the sister city to the south. This ranch was close to the river and a prized target for the bandidos during the days of Pancho Villa. It was built with many secret rooms and passages and heavy wooden shutters on the windows to protect its residents. 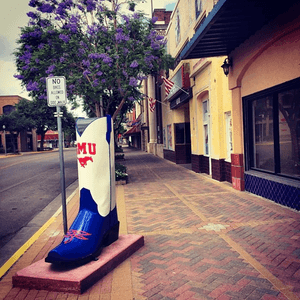 One of many cowboy boots displayed throughout Mercedes

Mercedes is home to the most unique Public Art project in the state of Texas. There are 30 handcrafted 5 1/2 foot tall cowboy boots dispersed throughout the city, each beautifully painted with different colleges from around the state, country and even Mexico. People who are passionate about their alma mater come from all over to take a picture with their boot.

The climate in this area is characterized by hot, humid summers and generally mild to cool winters. According to the Köppen Climate Classification system, Mercedes has a humid subtropical climate, abbreviated "Cfa" on climate maps.

In addition, South Texas Independent School District, which is headquartered in Mercedes, serves magnet students in many Rio Grande Valley communities, including Mercedes.

The Science Academy of South Texas and South Texas High School for Health Professions, schools of STISD, are in Mercedes.

In 2015, the city joined other cities in south Texas in support of the newly formed University of Texas Rio Grande Valley by adopting a resolution declaring August 31 as UTRGV day. Also, they recognized the university by installing a boot with the university logos right across the municipal city hall.

All content from Kiddle encyclopedia articles (including the article images and facts) can be freely used under Attribution-ShareAlike license, unless stated otherwise. Cite this article:
Mercedes, Texas Facts for Kids. Kiddle Encyclopedia.