Palo Alto Battlefield National Historical Park near Brownsville, Texas is a National Park Service unit which preserves the grounds of the May 8, 1846, Battle of Palo Alto. It was the first major conflict in a border dispute that soon precipitated the Mexican–American War. The United States Army victory here made the invasion of Mexico possible. The historic site portrays the battle and the war, and its causes and consequences, from the perspectives of both the United States and Mexico.

The National Park Service has acquired a little more than a third of the authorized land for the park, including the 300 acres (1.2 km2) southern core battlefield tract, which served as the location for Mexican forces during the Battle of Palo Alto. Private landowners still control some 2,000 acres (8.1 km2) of the battlefield. Honey Mesquite (Prosopis glandulosa), although a native plant, is present in an unusually high concentration, altering the cultural landscape and threatening the natural and cultural resources at the park.

The park's visitor center features exhibits about the battle and the Mexican–American War, as well as a 15-minute video titled "War on the Rio Grande". A half-mile trail leads to an overlook of the battlefield and includes interpretive panels. 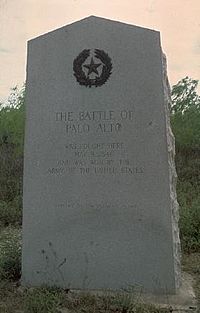 All content from Kiddle encyclopedia articles (including the article images and facts) can be freely used under Attribution-ShareAlike license, unless stated otherwise. Cite this article:
Palo Alto Battlefield National Historical Park Facts for Kids. Kiddle Encyclopedia.