Kids Encyclopedia Facts
This page is about Pozole, the soup. For the drink, see Pozol.

Pozole ( from Nahuatl languages: pozollcode: nah is deprecated , meaning "Cacahuazintle"), is a traditional soup or stew from Mexican cuisine. It is made from hominy with meat (typically pork, but possibly chicken), and can be seasoned and garnished with shredded lettuce or cabbage, chile peppers, onion, garlic, radishes, avocado, salsa or limes. Known in Mesoamerica since the pre-Columbian era, today the stew is common across Mexico and neighboring countries, and is served both as a day-to-day meal and as a festive dish.

Pozole can be prepared in many ways, but all variations include a base of cooked hominy in broth. Typically pork, or sometimes chicken, is included in the base. Vegetarian recipes substitute beans for the meat.

The three main types of pozole are blanco/white, verde/green and rojo/red. White pozole is the preparation without any additional green or red sauce. Green pozole adds a rich sauce based on green ingredients, possibly including tomatillos, epazote, cilantro, jalapeños, or pepitas. Red pozole is made without the green sauce, instead adding a red sauce made from one or more chiles, such as guajillo, piquin, or ancho. 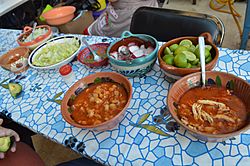 Pozole is a typical dish in various states such as Nayarit, Sinaloa, Michoacán, Guerrero, Zacatecas, Jalisco, and Morelos. Pozole is served in Mexican restaurants worldwide. It is also popular (under the older spelling posole) in the cuisine of New Mexico where it was a common dish among the Pueblo Indians residing along the Rio Grande.

Pozole is also a festive dish. In Mexico, pozole is typically served on New Year's Eve to celebrate the new year. Pozole is frequently served as a celebratory dish throughout Mexico and in Mexican communities outside Mexico. Other occasions for serving pozole include Mexican Independence Day, birthdays, Christmas and other holidays.

This drawing from page 22 of the Codex f Magliabechiano depicts pozole.

Pozole was mentioned in the 16th century Florentine Codex by Bernardino de Sahagún. Since maize was a sacred plant for the Aztecs and other inhabitants of Mesoamerica, pozole was made to be consumed on special occasions.

According to research by the Instituto Nacional de Antropología e Historia (National Institute of Anthropology and History) and the Universidad Nacional Autónoma de México, on these special occasions, the meat used in the pozole was human. After the prisoners were killed by having their hearts torn out in a ritual sacrifice, the rest of the body was chopped and cooked with maize, and the resulting meal was shared among the whole community as an act of religious communion. After the Conquest, when cannibalism was banned, pork became the staple meat as it "tasted very similar" [to human flesh], according to Bernardino de Sahagún.

All content from Kiddle encyclopedia articles (including the article images and facts) can be freely used under Attribution-ShareAlike license, unless stated otherwise. Cite this article:
Pozole Facts for Kids. Kiddle Encyclopedia.