It is one of the six major types of corn, the others being dent corn, flint corn, pod corn, popcorn, and flour corn.

Sweet corn occurs as a spontaneous mutation in field corn and was grown by several Native American tribes. The Iroquois gave the first recorded sweet corn (called 'Papoon') to European settlers in 1779. It soon became a popular food in the southern and central regions of the United States. 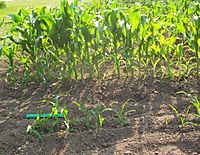 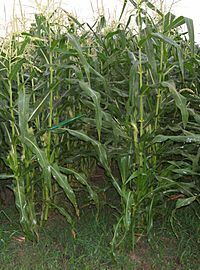 The same rows of corn 41 days later at maturity.

Open pollinated cultivars of white sweet corn started to become widely available in the United States in the 19th century. Two of the most enduring cultivars, still available today, are 'Country Gentleman' (a Shoepeg corn with small kernels in irregular rows) and 'Stowell's Evergreen'.

Sweet corn production in the 20th century was influenced by the following key developments:

There are currently hundreds of cultivars, with more constantly being developed. 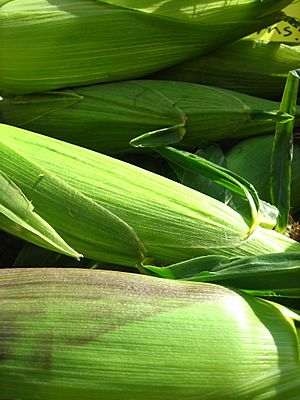 The fruit of the sweet corn plant is the corn kernel, a type of fruit called a caryopsis. The ear is a collection of kernels on the cob. Because corn is a monocot, there is always an even number of rows of kernels. The ear is covered by tightly wrapped leaves called the husk. Silk is the name for the pistillate flowers, which emerge from the husk. The husk and silk are removed by hand, before boiling but not necessarily before roasting, in a process called husking or shucking. 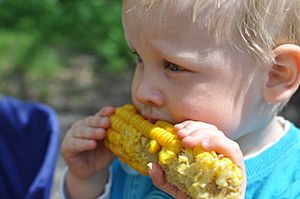 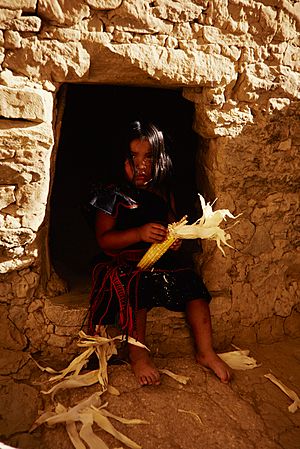 In most of Latin America, sweet corn is traditionally eaten with beans; each plant is deficient in an essential amino acid that happens to be abundant in the other, so together sweet corn and beans form a protein-complete meal. In Brazil, sweet corn cut off from the cobs is generally eaten with peas (where this combination, given the practicality of steamed canned grains in an urban diet, is a frequent addition to diverse meals such as salads, stews, seasoned white rice, risottos, soups, pasta, and whole sausage hot dogs).

In Malaysia, there's a variety unique to the region of Cameron highlands named "pearl corn". The kernels are glossy white resembling pearls and can be eaten raw of the cob but often boiled in water and salt.

In the Philippines, boiled sweet corn kernels are served hot with margarine and cheese powder as an inexpensive snack sold by street vendors.

Similarly, sweet corn in Indonesia is traditionally ground or soaked with milk, which makes available the B vitamin niacin in the corn, the absence of which would otherwise lead to pellagra; in Brazil, a combination of ground sweet corn and milk is also the basis of various well-known dishes, such as pamonha and the pudding-like dessert curau, while sweet corn eaten directly off the cobs tends to be served with butter.

The kernels are boiled or steamed. In Europe and Asia they are often used as a pizza topping or in salads. Corn on the cob is a sweet corn cob that has been boiled, steamed, or grilled whole; the kernels are then eaten directly off the cob or cut off. Creamed corn is sweet corn served in a milk or cream sauce. Sweet corn can also be eaten as baby corn.

In the United States, sweet corn is eaten as a steamed vegetable, or on the cob, usually served with butter and salt. It can be found in Tex-Mex cooking in chili, tacos, and salads. When corn is mixed with lima beans it is called succotash. Sweet corn is one of the most popular vegetables in the United States. Fresh, canned and frozen sweet corn rank among the top ten vegetables in value and per capita consumption. Frozen cut corn is exceeded only by frozen potato products while frozen corn on the cob is 4th following peas.

If left to dry on the plant, kernels may be taken off the cob and cooked in oil where, unlike popcorn, they expand to about double the original kernel size and are often called corn nuts. A soup may also be made from the plant, called sweet corn soup.

Open pollinated (non-hybrid) corn has largely been replaced in the commercial market by sweeter, earlier hybrids, which also have the advantage of maintaining their sweet flavor longer. su cultivars are best when cooked within 30 minutes of harvest. Despite their short storage life, many open-pollinated cultivars such as 'Golden Bantam' remain popular for home gardeners and specialty markets or are marketed as heirloom seeds. Although less sweet, they are often described as more tender and flavorful than hybrids.

All content from Kiddle encyclopedia articles (including the article images and facts) can be freely used under Attribution-ShareAlike license, unless stated otherwise. Cite this article:
Sweet corn Facts for Kids. Kiddle Encyclopedia.