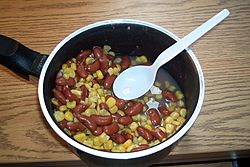 A succotash prepared with kidney beans

Succotash (from Narragansett sohquttahhash, "broken corn kernels") is a culinary dish consisting primarily of sweet corn with lima beans or other shell beans. Other ingredients may be added including corned beef, potatoes, turnips, salt pork, tomatoes, multi-colored sweet peppers, and okra. Combining a grain with a legume provides a dish that is high in all essential amino acids.

Because of the relatively inexpensive and more readily available ingredients, the dish was popular during the Great Depression in the United States. It was sometimes cooked in a casserole form, often with a light pie crust on top as in a traditional pot pie.

Succotash is a dish with a long history. The stew was introduced to the colonists in the 17th century by indigenous Americans. Composed of ingredients unknown in Europe at the time, it gradually became a standard meal in the cuisine of New England and is a traditional dish of many Thanksgiving celebrations in the region, as well as in Pennsylvania and other states.

In some parts of the American South, any mixture of vegetables prepared with lima beans and topped with lard or butter is called succotash. Corn (maize), American beans, tomatoes, and peppers are New World foods.

Catherine Beecher's 19th-century recipe includes beans boiled with corn cobs from which the kernels have been removed. The kernels are added later, after the beans have boiled for several hours. The corn cobs are removed and the finished stew, in proportions of 2 parts corn to 1 part beans, is thickened with flour.

Henry Ward Beecher's recipe, published in an 1846 issue of Western Farmer and Gardner, adds salt pork, which he says is "an essential part of the affair."

All content from Kiddle encyclopedia articles (including the article images and facts) can be freely used under Attribution-ShareAlike license, unless stated otherwise. Cite this article:
Succotash Facts for Kids. Kiddle Encyclopedia.