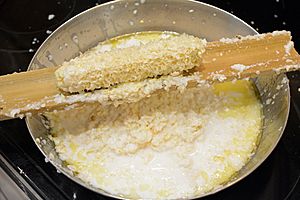 Cooking creamed corn. The corn is cut off the cob into a cooking pan.

Creamed corn (which is also known by other names, such as cream-style corn) is a type of creamed vegetable dish made by combining pieces of whole sweetcorn with a soup of milky residue from pulped corn kernels scraped from the cob. Originating in Native American cuisine, it is now most commonly eaten in the Midwestern and Southern United States as well as the Canadian province of Quebec, where it is notably used in pâté chinois. It is an almost soupy version of sweetcorn, but unlike other preparations of sweetcorn, creamed corn is partially puréed, releasing the liquid contents of the kernels. 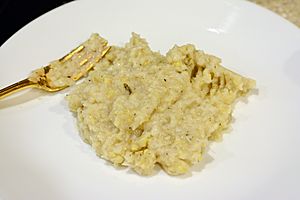 Creamed corn on a plate

The dish does not usually contain any cream, but some homemade versions may include milk or cream. Sugar and starch may also be added. Store-bought canned preparations may contain tapioca starch as a thickener.

All content from Kiddle encyclopedia articles (including the article images and facts) can be freely used under Attribution-ShareAlike license, unless stated otherwise. Cite this article:
Creamed corn Facts for Kids. Kiddle Encyclopedia.